To protest or not to protest. That is the question.

By Unknown January 13, 2014
TIME Magazine proclaimed the "indignado" (the protester) as the person of the year back in 2011. This was a gesture of recognition of the tremendous impact rebellious/revolutionary movements have had all over the planet: from Madrid to Wall Street, from Chile to China and, above all, in the Arab World, where scores of outraged youths took to the streets chanting their demands. They managed both to overthrow tyrants and to fascinate and inspire many amongst us. However, it seems that protesting, voicing people’s demands or disapproval of existing policies, has turned in several countries into an extreme sport as of lately. Two examples have notably caught our attention, two cases nearly nobody could instantaneously draw parallels about: Spain and Egypt. Two countries where two deeply controversial (anti) protests laws have been adopted during the last months.

The "public safety" legislation (Ley de Seguridad Ciudadana) put through in Spain last November has also been defined by many as a "gag rule", a blow to democracy. Demonstrating near state buildings without administrative permission will result in steep fines of up to €600,000, while participation in "violent" protests can result in a minimum of two-year jail sentence. Hefty fines will also be imposed on activists who publish images of police or interrupt public events. For instance, insulting a police officer during a demonstration could cost up to €30,000. Participating in a demonstration wearing a hood or organizing “unlawful” demonstrations via social media, a fine of €30,000.

In an article in The Guardian, Manuel Ballbé, a law professor at the Autonomous University of Barcelona, said the legislation was less about cracking down on demonstrators and more about winning votes for the conservative government: "they need to radicalise these movements, to create a climate of violence. Then the government can come out and show that they are the best party to institute law and order". The “silent majority” has become a central category for the political game in Spain and Egypt. It seems clear that these new policies and laws have no other purpose than to instill fear, trying to transform the alleged defying vocal minority government into an Orwellian silent and obedient majority.

Everything seems to indicate that this objective was precisely what Egypt's current government had in mind last November when passing an anti-protest law that has sparked many counter-reactions. The law requires that protest organizers seeking to mobilize more than 10 people obtain permission from the Interior Ministry three days in advance, and forbids political gatherings around places of worship. The interior Ministry has the right to prohibit any gathering deemed a threat to security and public order, "disrupt citizens' interests" or "obstruct justice". Police are allowed to forcibly disperse unruly demonstrators, and heavy prison sentences will be imposed for those who violate the law, including seven years for the use of violence at a protest, one year for covering the face during a protest, and one year for protesting outside a place of worship. Anyone attending an unauthorised protest can be fined $1,500.

The main aim of the piece of regulation was halting demonstrations organized by the Muslim Brotherhood and their supporters, as well as activists opposing the ousting of Mohamed Morsi and bloody crackdown on Muslim Brotherhood sit-ins in Cairo, or any emerging opposition force that may be seen as a threat by the current regime. The Law has instead triggered the mobilization of both Islamist and non-Islamist activists. The latter feel this has been an ultimate blow to all they were fighting for on January 2011. Many -yet a minority- decided to convey their message by means of precisely what the regime fears the most: taking to the streets regardless of the foreseeable repression. More than 20 activists were arrested during the first demonstrations against the measure. A number that has steadily increased ever since. Many remain in custody, notably Ahmed Maher, head of the 6 April youth movement (that paradoxically supported Morsi's overthrow). Some activists denounced they had been subjected to torture and sexual assault before dumping a number of them in the desert. Still, activists keep on warning they will not protest at the whim and convenience of a counter-revolutionary regime.

Spanish and Egyptian “indignants” are not the only ones to have been left behind when fighting for their rights: many other governments have lately decided to tackle the issue in their own way. The "primary purpose of the state," said Margaret Thatcher, "is to maintain order." This has been the case of Greece, where the population has witnessed (and bore) periods of emergency government. In Chicago and Quebec, anti-protest laws have also been passed. In 2011, Chicago mayor, Rahm Emanuel, called for the City Council to pass "temporary" anti-protest measures in response to the planned protests on the occasion of NATO and G8 summits. The laws included a $1m insurance mandate for public protests, heavy policing and greater obstacles to obtaining a protest permit. By early 2012, the legislation had been made permanent. Later that same year, as the administration of Jean Charest in Quebec sought to deal with a tumultuous uprising of students against increased tuition fees, it passed a piece of emergency legislation named Bill 78. With the support of the state's employers, it imposed severe restrictions on the ability to protest, including banning protests within 50 metres of a college and giving the right to change the route of a protest on short notice, with severe fines for those protesters who did not co-operate with the authorities. In Japan, the government tried to do the same following the massive anti-nuclear demos after the 2011 Fukushima disaster. And wherever protest has not yet been made illegal by law, police forces are trying to do everything within their power to treat it as such — be it in the UK, or the US, where the Occupy Movements did not loose steam but were rather gradually eroded and left powerless by the authorities.

In Egypt, many believe the banning of peaceful protests is increasingly leaving discontent citizens with no way to express their opposition but through violence, because oppression breeds further violence. Will that happen in Spain? Indeed, and just like their Egyptian brethren, instead of being cowered, the decentralized coordinating platform of Spain’s powerful social movements immediately coalesced back into action, and organised a major demonstration in front of the Parliament: thousands of protesters gathered in front of the symbolic "Congreso de los Diputados" and, as security forces tried to break up the demonstration, attacked them with bricks and bottles and smashed up their police cars.

Everywhere these legislations are being passed, the attempted closure is only drawing people back into the streets. Machiavelli once conceptualized political power as a centaur (half man, half beast) both sides of which must be mobilized by the astute statesman in order to subdue his enemies; not least the rebellious multitude that in a state of discontent marches upon the palace gates. In his words, "there are two methods of fighting, the one by law, the other by force: the first method is that of men, the second of beasts; but as the first method is often insufficient, one must have recourse to the second".

While the UN and other international bodies have roundly criticized Egypt for the harsh law not meeting international standards, no authority has so far dared to speak about the crackdown in Spain. Referring to Egypt, UN High Commissioner for Human Rights Navi Pillay urged two months ago the authorities to "amend or repeal this seriously flawed new law". She reminded that "this is a country whose people have proclaimed loudly, clearly, courageously and repeatedly their desire to be able to demonstrate peacefully in accordance with their international human rights". The “indignado”'s dream hinged on they and their brethren regaining freedom. The right to protest is generally considered to be one of the primary gains of the 25th January revolution. The right to protest is generally taken for granted in Spain, although nobody seems to remember that it was only 40 years ago when our fathers fought for it against a dictatorship. We seem to be facing, once again, a crisis of freedom as a fundamental right and, above all, a calling into question of the so-called democracy.

As Machiavelli also crucially observed, we need to remind ourselves that no political authority can ever rule through force alone. Violence breeds violence and, as Tunisia (the country where the Arab Spring was born) has shown, only compromise can spare a country from turmoil and continuous discontent. 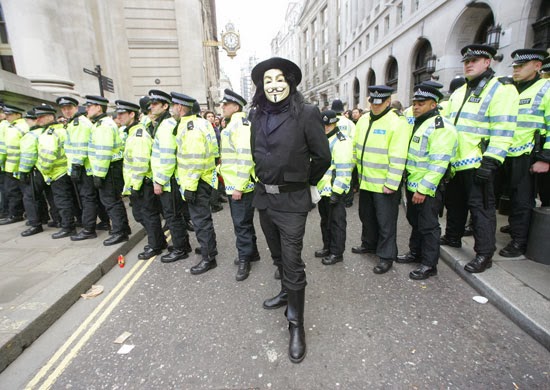