I won't sum up the evolution and characteristics of the Arab Spring for you, you are all aware of them. I won't even enter into the debate on the term "Arab Spring" and its real meaning (at least, not now!). But I have to admit I really like the sound of it, moreover when it is used to add a new country to this encouraging domino effect movement, and that seems to be the case of Palestine. Nonetheless, this case presents a new surprising feature... It looks like one of the leaders of the country the events are taking place in is actually supporting the uprising!! So... who/what do the people go against (besides, as always, the Israeli occupiers)? Well, they are mainly demonstrating against the other visible authority of the Palestinian Authority. Wouldn't it be nice if I put names to all of these characters?

A (key?) meeting of the Arab League was held last week in Cairo (President Morsi surprised us again with flammable declarations about Syria, he does seem to be willing to stand out, as I already pointed out!), during which Mahmoud Abbas addressed other Arab leaders saying "The Palestine spring has begun and we are with what the people say and demand" (I’m still trying to guess what was he meaning when using the term "we", as half of the leaders remain unmoved by protests in their own countries). [He should be careful, though, about eroding the expression "Palestinian Spring" he had already used when asking for recognition of the state before the U.N. see Abbas declares 'Palestinian Spring'].

What are the Palestinians asking for? They first want a way out of the stalemate the country has been in for years: last year, a deal was brokered by Egypt whereby Hamas and Palestinian Authority Leaders would resume negotiations and hold fair free elections in both Gaza and the West Bank. Conversations had been going on, but not at the pace desired by the people, and have not still delivered any tangible result. Palestinians are aware they need reconciliation and unification if they are to take any kind of meaningful measure (be it unilateral or bilateral) regarding the conflict with Israel. Israel is nowadays in no hurry to talk peace. But, above all, the economy in both the West Bank and Gaza (especially in the strip) are in a pitiful state, and not only as a consequence of the occupation. For example, and according to one recent report by the United Nations Conference on Trade and Development (UNCTAD), food insecurity in the West Bank affects 66 per cent of the population. This adds to, amongst other issues, acute shortages of medicine and a recent hike in petrol prices in Israel.

The protests are mainly directed against Salam Fayyad, the Prime Minister (pictured under. Who? The face of the "doll" the youths are setting fire to). Why him? It all depends on the version of the story you listen to. I personally believe the poor democratic record of the PA has something to do with it. Some think he has become the scapegoat of every bout of Palestinian dissatisfaction. He (former IMF worker) has been for years the darling of Westerners sending aid and willing to help the cause and, even after years of close cohabitation, has never really got along with Abbas. He is nowadays blamed for cutbacks to entitlements (the actual trigger for the demonstrations has been the inability of the Government to pay salaries to its employees). In view of the probable escalation and after having explained part of his policies on his Facebook account, the PM has declared he is ready to step down, even though that won't fix any material issue (he has however affirmed this movement cannot be characterized as the arrival of the "Palestinian Spring", "we will not reproduce the Arab Spring here, because we are not a state").

And now comes an idealist comment (sorry, Maria, that's me): do you remember newspapers (like The Economist) talked about an "Israeli Spring" last year? Are the youths in both countries so different? They both fight for their rights, for a better position, for a peaceful living... Therefore they are not, and they surely wouldn't find it so difficult to live together side by side. Why wouldn’t we then favour a "one state solution", that is to say, one secular state granting equal rights to all citizens (my favourite article ever on the subject). Dream on...

P.D. It is interesting to note how many commentators have spoken ahead of time; one example in Why has there been no Palestinian Spring? (worth reading, though).

P.D. Fayyad apparently counts with Abbas' full support, who said yesterday that "there is no disparity between the government and me: they follow my orders and I am committed to their policy development and recommendations". 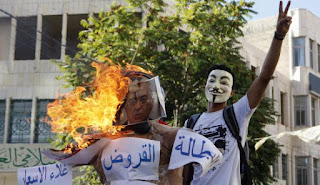