"The government and the opposition have won. Tunisia has won"

By Unknown February 06, 2014
Every time I now hear/read about the so-called Arab Spring, few are those who are not grasping at straws when referring to Tunisia. Tunisia was the country where the immolation of a desperate young graduate who had to sell fruits in the street in order to cater for his family sparked an uprising that spread throughout the region and amazed many amongst us, getting our hopes up that the Arab world would finally rid of its tyrants. Tunisia was also the first country to hold elections, the first country to put in place a kind of representative parliament, the first country in which political and union activity seemed to be leading somewhere. Until violence broke out, political assassinations shook the entire country, in the face of which the Islamists in power appeared more than unwilling/incapable to find an exit to the stalemate the country was plunged into. The transition has been convoluted and plagued by disturbances that nearly derailed the process. The main end-product, a Constitution that was due two years ago and was widely awaited by the population, was adopted on January 27th leaving behind huge sighs of relief.
The approval of the text, by a majority of 200 votes out of 216 members of a National Constituent Assembly that has been carrying out both legislative and constitutional work, has witnessed many challenges that were successfully overcome. The main hurdle derived from Ennahda's drumbeat on giving shape to a bespoke text. Current MPs even threatened a secular politician amid a brouhaha that almost halted the constitutional debate. The Islamists, mainly because they witnessed how their brethren were faring elsewhere, but also as a consequence of mounting pressure from both the West and the Tunisian people, ultimately had to make concessions, particularly by dropping their objective of declaring the supremacy of Shariah law. Tunisia's Prime Minister Ali Larayedh resigned in October, ending the rule of the Islamist party in line with a transition agreement. One word many have used to describe the process is consensus. The text is the result of combined efforts of the opposition, civil society, unions, employers and random people who took to the streets in order to pull politicians out of their sterile games. The proof is in eating the pudding, and over the past two months, the items have been discussed one by one by the Assembly in plenary.

The brand new text (the second Constitution, together with Bourguiba's key 1959 Chart, suspended since March 2011) is an incredibly modern document that recognizes a significant number of freedoms and shrines separation of powers as no other Constitution in the Arab world does. At the same time, it respects the traditions by referring to both Tunisia’s Islamic and Arab identity. Article 1 proclaims that "Tunisia is a free, independent and sovereign state, its religion is Islam, its language Arabic and its regime a republic". Reminding everybody where the text finds its roots in, its preamble is based on the objectives of the revolution: freedom and dignity (maybe the only achievement of the ill-fated High Authority for the Achievement of the Revolution Objectives that prepared for the October 2011 elections?). Many have also linked the established right to due process and protection from torture, as well as the right of access to information and communication networks and the freedom to form political parties, trade unions and associations, to the ordeal many across the region had to go through so as to witness the writing of texts like this.

Many commentators have hailed the fact that the Constitution unambiguously mentions the "civil state" in a country that is entirely Muslim. This text, however, does nothing but honour a big part of the principles that inspired the previous text, that laid the foundations of a civil secular state. Islamists did not obtain the enshrinement in the Constitution of the criminalization of violations of the sacred. They did not even achieve the recognition of a clause that is considered fundamental in countries like Egypt (and impious by others) - that is, the one stating that sharia Law is a main source of legislation. Even though Article 6 mentions that the state is "the guarantor of religion" and "the protector of the sacred", progressive forces have pushed through the recognition of the principle of freedom of conscience, together with freedom of belief and freedom of worship, thus obliging the state to guarantee and protect it, something it hasn't done up until now, especially against the Salafists. A first (although controverted) move is also the explicit proscription on takfir (branding dissenters infidels or non-believers).

The Constitution establishes in its preamble "a democratic and participatory republican regime in the context of a civil state and governed by the law", sovereignty belonging to the people and being exercised on the basis of peaceful change through free elections. The new constitution will thus see the establishment of a new government. Once, that is, a new electoral law is approved (together with a transitional justice draft law that is badly needed). Starting from scratch is not easy. But countries with a past like Tunisia's may well need to. Ennahda was wise enough to hand over power to a non-partisan caretaker government before the adoption of the Constitution. What at first looked as a recognition of failure in the face of mounting dissent is in reality a move towards renewed victory in future elections, thus regaining public support and averting to follow the path of the Muslim Brotherhood in Egypt.

Several challenges have still not been tackled, though, such as the badly needed revival of an economy that has cruelly suffered from the instability of the past three years. Investments depend on the ability to provide an atmosphere of security and stability. The technocratic government now in charge until parliamentary and presidential elections later this year could certainly use the economic assistance and trade opening long promised by Washington and Brussels. At the same time, Tunisian authorities should not forget the need to fight against endemic violence stemming partly from economic struggles, but also from a polarization that may now be found in each and every corner of the region. Citizens also need to recover an eroded public confidence in the political system. Indeed, some in the street believe that we should not expect much from a Constitution whose development required that much time and which contains obvious contradictions. All in all, and in the very least, nearly everybody agrees on the positive impact of the text, both international-wise, the West now presenting Tunisia as the main and only trend-setter, but also from a regional point of view, particularly in Egypt, where the recently passed through Constitution is everything but a consensual end-product.

The Carta Magna caught everybody by surprise by its uniqueness and progressive nature. Tunisia becomes the first country guaranteeing equality between men and women, and especially gender parity in elected assemblies. In this sense, part of Article 46 deserves to be mentioned: "the State undertakes to protect the acquired rights of women, supports and works to improve them". Another shocking point is the declaration whereby health care is a human right, and preventative care and treatment are guaranteed for every citizen. Last but not least, the text also contains a constitutional mandate for environmental protection, the only developing country in the world to do so. What is more important in countries where legal certainty has been conspicuous by its absence, no constitutional amendment will be able to touch the gains in human rights and freedoms. As a matter of fact, a Constitutional Court (whose composition is determined by both the executive and the legislature branches) will be put in place to limit the legislative power and the ability of the legislature to enact laws contrary to the rights and fundamental freedoms.

While Tunisia was celebrating its new legal framework, the Supreme Council of Armed Forces in Egypt endorsed the new country leader Field Marshal Abdel-Fattah El-Sissi as a candidate to run for president. The military-led government had previously pushed through a new Constitution (the previous constitution was also pushed through by Islamists against the wishes of a significant portion of the population), and looks nowadays more ready than ever to assert its full control of the country. Several differences distance Tunisia from Egypt. Tunisia's military is comparatively weak and not a dominant force on the political scene. When confronted with widespread, Tunisia's Islamists agreed to give up power and enter into a National Dialogue, unlike the Muslim Brotherhood, which resorted to a overarching presidential decree. Ennahda also had to acknowledge that a democracy cannot tolerate political assassination, while the Brotherhood forces blatantly attacked protesters last Winter.

At the same time, Egypt has both Muslims and Christians, minorities that have often been the target of violent attacks, a situation that is different from Tunisia's, which is religiously and denominationally homogeneous. Unlike Egypt, in Tunisia there is a pro-civil state movement that has been built over the years and respected by the regime. But the most important difference lies in the fact that authentic reconciliation took place between Islamist and secular forces that came together to ratify an unified commitment to democracy, to animate and sustain Habib Bourguiba's legacy. Isn't it ironic that while the secular institution led by Bourguiba was undemocratic, today’s great constitutional achievement has made it democratic?

Three years after its Revolution, Tunisia has given birth to a culture of peaceful transfer of power, where transition to a permanent government is enacted though the ballot and not the bullet. The Constituent Assembly erupted in joy after adopting marking a democratic milestone for the birthplace of the Arab Spring. President Moncef Marzouki shouted after signing the constitution that "the government and the opposition have won. Tunisia has won." 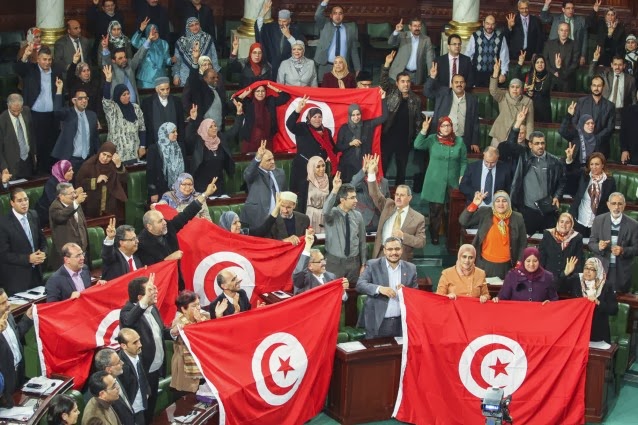