Tunisia inaugurated the "Arab Spring". How is it behaving?

By Unknown November 03, 2012
These days, Tunisia is supposed to be celebrating the first anniversary of the holding of real fair free transparent elections for the first time in the Arab world. Indeed, Tunisia was the state where the "Arab Spring" was first kindled (although some believe this phenomena can be tracked back to previous events), its population staging what some like to call the "Jasmine Revolution" (in fact, after the uprisings broke out, Chinese authorities banned the term "jasmine" from any kind of Internet search, probably afraid of an eventual contagion among their nationals). But nowadays the country is awash with uncertainty and nobody seems to be celebrating. As it has been seen in other countries of the region, those who united to overthrow the dictator are now divided and give a hint of the "two Tunisias" that have always existed. Some accuse the Government of having put into place, to that effect, a "divide and rule" system.

On 14 October, the country's ruling coalition, headed by the moderate Islamic Ennahda Movement (led by the media-savvy Rached Ghannouchi, although the Head of Government is the Party's SG Hamadi Jebali), who as of lately had been widely accused of a certain penchant for "authoritarianism", said it had agreed to hold presidential and parliamentary elections on 23 June, with a presidential runoff scheduled for 7 July. The President will be directly chosen by voters, they added, and the current president elected by the Constituent Assembly, Moncef Marzouki, will then be replaced. Ennahda largely won last year's elections (partly thanks to its much better organization and wider experience, partly thanks to funding from neighboring countries), and decided to form a coalition government with two secular parties, the Congress for the Republic (called by some an Ennahda's "puppet") and the leftist Ettakatol, all of them dubbed the "Tunisian troika". This move sparked bittersweet reaction: even though people who were out of power are now in power, and someone would get the feeling things have actually changed, certain remnants of the old regime still cling to power.

The coalition also controls, with a majority of 217 seats, the National Constituent Assembly, in charge of approving guidelines for the country’s governance during its transition, of electing an interim government, and above all of drafting the country's new Constitution, a task that has received widespread criticism from all sides of the political spectrum (from the international community, as well), especially directed against its slowness and stiffness (although a draft of the constitution released in August). Now it seems there will be one issue less to be discussed, as Tunisia is set to have a parliamentary system, despite opposition from other parties, calling for the establishment of a dual political system. This has led to a notable widening of the rifts between secularists, Islamists and the supporters and opponents of the regime. There is a pinch of truth to the opposition's claims, though, as a decree was signed last year whereby the National Constituent Assembly would lose its legitimacy after one year following its formation, for the body was supposed to submit its draft constitution on 23 October (the assembly retorts this was a moral obligation, nothing more). Recent occurrences add to the political tensions, in particular Ennahda’s rejection of any dialogue with its main adversary, the Nida Tunis Party ("Call of Tunisia), the legal steps taken by the Congress for the Republic to ban the latter party and, on top of this, the murder of Nida Tunis' leader on 18 October.

The "troika" has been the target of many accusations. First of all, people often cite a striking lack of security on the streets (security forces have not been able to efficiently react to several Salafist attacks, such as the storming of the US Embassy, or counter attacks like this one and, in addition, an Al-Qaeda-linked group attacked the government after it accused it of working for the West). Corruption is also pointed out as a main factor of discontent, as the ruling parties have appointed their own people everywhere (governors, delegates, CEOs, heads of public media...). Moreover, the economic conditions remain direly insufficient: the cost of living has risen (despite optimistic figures published by the Government), and the country is not receiving the foreign investment and the scores of tourists it was expecting. On the other hand, a real reconciliation process has not taken place, and the families of the martyrs and wounded of the revolution are still waiting for any kind of compensation (both economic and psychological). Anthough a Commission to that effect was created, justice has not been made. The country also has to face accusations of human rights violations, according to an announcement by Amnesty International stating that the current government is not respecting human rights and questioning the government’s commitment to reform. In a recent report, Human Rights Watch said that the authorities appeared unable or unwilling to protect individuals from attacks by religious extremists.

As a result, popular resentment against the Government has risen, and protests break out every now and then, their size increasing by the week. Strikes, sit-ins and demonstrations have become commonplace. However, and according to the newspaper As-Safir, no one is demanding the resignation of the Constitutional Assembly, but instead the possibility of the body consulting other political forces and respecting already submitted pundit's opinions. In this sense, a parallel body, the National Dialogue Congress has been significantly created in order to overcome the current stalemate, although its conclusions have been rejected by the ruling parties. The opposition is also demanding to make some sovereign ministries — namely the Interior and Justice Ministries— neutral by appointing it to non-partisan sides. They also consider that a Supreme Commission for Elections should be duly appointed on a timely manner. With these purposes in mind, various secularist groups talk about organizing an opposition coalition under the baton of Beji Caid Essebsi, former interim prime minister.

Even though Tunisia was widely preached as a model for its brethren, as the good pupil of the "Arab Spring", it seems many things have come in its way towards turning into a consensual democracy in a thriving stable country. Will the country be able to overcome these obstacles? 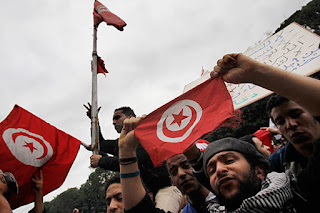 NYT Op-ed contributor's brave opinion: "we have one thing left from our revolution: free speech. That is why Facebook is filled with outrage and cell-phone videos of the madness; why we exchange skits and caricatures of our dictators, past and present. If something will save us, it will be our refusal to shut up again".