So Zenawi has died... now what?

By Unknown August 21, 2012
Ethiopian (former) Prime Minister, President and country hero, Meles Zenawi, has died at the age of 57, according to Ethiopian official sources, although nobody exactly is aware of the circumstances of the passing away (not surprising in such a secretive country). The interim leader will likely now be the country´s Deputy Prime Minister (and Minister of Foreign Affairs) , Hailemariam Desalegn, according to a moot Constitution.

Zenawi was well known for his peculiarities (shrewdness, extreme austerity, seriousness and industriousness) and 20 years-long clinging to power. A former guerrilla member (he came to power as the leader of a rebel group which finally rooted out dictator Mariam in 1991). But, above all, he was a pragmatist: he somewhat "sidelined" his Marxist convictions in favour of a more convenient approach with the aim of luring Western governments avid of giving away money to third world countries after the Cold War. Ethiopia however remains, despite the spectacular growth it has experienced during the last years, one of the poorest countries of the region (per capita of income of more than $1,000). Zenawi also was an overactive and overbearing leader in the regional scene: Ethiopia and Eritrea fought a full blown-out war from 1998 to 2000 (a conflict that remains extremely sensitive), Ethiopian troops have intervened (in collaboration with the U.S. Army) various times in neighboring Somalia fighting yihadist groups, everyone in Egypt knows about his darling project of building an enormous dam (the Grand Renaissance Dam) which drives the Arab Government crazy, and Zenawi played an incomparable role in brokering peace between the "two Sudans".

Moreover, Zenawi was accused many times of putting into practice repressive and authoritarian means against his own population, of being a dictator ruling with an iron fist. Human Rights watchdogs like Human Rights Watch or Amnesty International have repeatedly accused him of bashing any individual who dared criticising him: numerous opposition leaders were jailed and/or tortured after the 2005 controverted elections, and most of them, together with dozens of journalists were arrested under a 2009 harshly criticized anti-terrorism Law. According to The New York Times, the Ethiopian government sentenced two Swedish journalists last year to 11 years in prison after they were caught inside Ethiopia traveling with a rebel group, and jailed this year a prominent Ethiopian journalist on vague terrorism charges. Members from his ethnic minority group from northern Ethiopia, the Tigrayan, controlled the government and did not even allow a mere hint of dissent.

British Prime Minister David Cameron apparently said that Meles was an "inspirational spokesman for Africa". According to Le Monde, William Clinton once described Zenawi as part of the group he called "leaders of the African renaissance", but apparently these leaders did not take into account the country´s actual misery. Maybe this resource-rich country´s extremely religious population will be able to realistically heighten its expectations now? 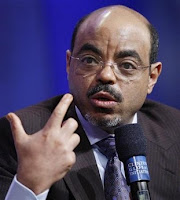