By Unknown August 28, 2012
So everyone speaking about the Syrian conflict knows the country is heading towards a full blown-out civil war (some consider it is already the case) waged by the Syrian regular Army (mainly controlled by Assad's Alawites closest allies) and its thuggish militia, the shabiba, against the rebels, most of them organized under the banner of the Free Syrian Army (FSA).

According to our beloved Wikipedia, "the Free Syrian Army is the main armed opposition group operating in Syria" [...] "composed of defected Syrian Armed Forces personnel and volunteers" [...] "its formation was announced on 29 July 2011 in a video released on the Internet by a uniformed group of deserters from the Syrian military who called upon members of the Syrian army to defect and join them".

First of all, the FSA is composed of civilians who took up arms. The peaceful demonstrations, following the example of their Arab brothers in Tunisia, Libya, Egypt, Yemen and Bahrain, started early in 2011. The uprising was quickly quelled by the regime, which most of the times resorted to violent means. That sparked a counter-reaction from part of the people itself, and scores of Syrians commenced attacking the policemen and soldiers. They were initially called the rebels, and made use of guerrilla tactics, some of them learned in the Internet. The civilians started with stones and firearms bought for hunting, but soon moved to Molotov cocktails and small homemade bombs.

On the other hand, Army defectors. It was not until mid-Spring/Summer 2011 that the FSA started accepting defectors. As professional soldiers joined them, the rebels gradually acquired assault rifles, machine guns and rocket-propelled and hand grenades, and even armored vehicle and tanks, although in very little numbers. Those defectors have been accused by the regime of merely being ""drop-outs, soldiers who had failed their basic tests who were motivated only by money" (Robert Fisk: 'They snipe at us then run and hide in sewers'').

The Independent's Robert Fisk interviewed Syrian soldiers, who accused the rebels of being "Foreigners, Turks, Chechens, Afghans, Libyans, Sudanese". "Syrians too, but smugglers and criminals". As El Pais' Mayte Carrasco (El Ejercito Libre Sirio cambía de rostro) points out, the FSA is currently not only composed of Sunni Syrians, but also of foreign (Canadians, Australians, Emiratis...) Muslim volunteers ready to fight for the same ideal.

Their weapons come from various sources: they have been taken from dead Syrian troops or soldiers who had been captured, Army defectors joined with some, others have been stolen, and some of them have been smuggled through neighboring countries and allegedly provided by countries like Qatar.

What bonds this heterogeneous group? Their dissatisfaction, their hatred, their yearn to regain their lost dignity by any means, and that nowadays means by fighting and overthrowing the Regime that has repressed, tortured and killed their children, family members, friends, neighbors and even their enemies, who nevertheless deserved to live.

What about Al Qaeda's role? The Syrian regime's main accusation (and justification) points to the terrorist nature of the regime. The leader of al Qaeda, Ayman al-Zawahiri, has repeatedly voiced his support for the Syrian rebels and called upon Syrians to retaliate against the government, and has also called on militants in neighboring countries to help those in Syria. There are of course (self-confessed or hiding) Salafists and Jihadists inside the FSA, but, as The Arabist perfectly explains in his article On Jihadists and Syria not all of them are, and we should not believe that. 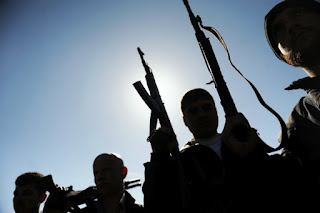