An "Arab Autumn" in Kuwait?

By Unknown October 30, 2012
Kuwait is known by some as the "most democratic country in the Gulf", which is not a lot to say, but at least means something when you talk about authoritarian/autocratic regimes like the ones installed in Saudi Arabia, Qatar, Bahrain... Kuwait is a tiny oil-rich country where both freedom of press, freedom of assembly and freedom of speech are guaranteed, a country where the citizens have enjoyed for years more liberties than any of their neighbors. The peaceful consensus is based on an agreement reached between the Royal Family and the main opposition parties in Jeddah during the first "Gulf War" on 2 August 1990 (the day Iraq invaded Kuwait) that stipulates that all sides should respect the 1961 Constitution. And that's the main reason why many believed the "Arab Spring" would not be successful there. But apparently they were wrong for, as of lately, more and more clashes have broken out between the 83 year old Emir Sheikh Sabah Al-Ahmad (and successive governments chosen by the ruling Al-Sabah family) and the opposition. Protests, most of them taking place in Irada Square (in front of the National Assembly), have been quelled by security forces resorting to batons, tear gas and bullet guns (wounding more than 100 activists and 11 police officers during the last gathering on 21 October). Mass demonstrations have been banned ever since, and many leaders have been arrested and taken to court, while others have gone on hunger strike. So it is clear we do find similar elements to neighboring countries, notably discontent and repression.

A striking similarity between Kuwait and Jordan (besides a blatant endemic corruption amongst the country's elites) would need to be stressed, i.e., the way their respective monarchs react in the face of growing popular dissatisfaction: dissolving Parliament (the Kuwaiti Parliament has been dissolved five times in the last 5 years) and calling for fresh elections. Last elections were held in February 2012, and 70% of the votes went to a heterogeneous opposition coalition composed of Islamists (particularly the Islamic Constitutional Movement, a Muslim Brotherhood affiliate), tribal leaders and secular figures. The roots of the current stalemate lie in a Constitutional Court's sentence that declared the body to be invalid and consequently ordered its replacement by the former Assembly (formed in 2009), deemed by the majority more "Government friendly". The Court, in a landmark case, also rejected the government’s request on the constitutionality of the 2006 Electoral District Law.

As a consequence, the Emir found himself faced with a notable escalation of protests, notably what was called the "March of Dignity" (despite the social protocol preventing citizens from addressing the Head of the State directly!) and calls for boycott (headed by MP Ahmad al-Saadoun: "the debate over [voting] district sizes is over. There is no room to discuss that any further. We call on the government to abide by the court’s decision, dissolve the 2009 parliament and call for new elections") began to be heard across the country. The Government, under pressure following additional moves such as the Head of the Supreme Judicial Council's resignation and the filing of a motion of "non-cooperation" against the Prime Minister at the National Assembly, had to give in and accepted holding early legislative elections in December 2012, however issuing on 19 October an urgent  binding decree overhauling the law "in their favor" (their allies largely benefiting from the change) and modifying the electoral districts: the country will still be divided into five constituencies, but each citizen will be allowed to cast its vote for only one candidate (as opposed to four), making it harder for the main political groups to build a coalition later on.

But definitely that won't be the end of the story for, according to various opposition MPs, "people have understood the message and anger has erupted in the streets, leading to the dissolution of two parliaments. The authorities want the voter to choose one candidate — nothing more — in order to control parliament". Moreover, it has also been pointed out that "the issuance of the decree concerning the electoral law is an explicit recognition by the Government that it does not recognize or respect the Constitutional Court’s ruling". The Parliament's Speaker Abdallah al-Roumi added that "a delayed dissolution of the 2009 Parliament will be costly, and redrawing the constituencies through a binding decree is political suicide and a crime against Kuwait". The opposition believes the authorities' attempts to tamper with the electoral system will eventually result in major confrontations. Former MP Musallam Al-Barrak has even warned about the possibility of "a third coup against the constitution, should an urgent decree be issued to change the electoral system and voting mechanism". Former MP Waleed al-Tabatabaie added that all the power should not be put in the sole hands of the Emir: "we respect the emir, but his right to legislate is limited, and he does not have the right to amend the electoral law". People symbolically shout in the stress "we will not let you!", publicly challenging, for the first time, the regime and even the ruler by name.

There's still hope. The Emir has yet to ratify the decree. Kuwaitis have been going to the polls for the last 50 years. Kuwaitis enjoy freedoms, accountability and checks and balances. Nevertheless, Kuwaitis still demand more rights and freedoms. Will their beloved Monarch listen to their chants? Or is Kuwait in danger of turning into another Bahrain? Maybe so, as the country seems to be already toying with the idea of deploying its troops. 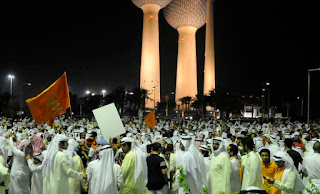