By Unknown December 13, 2012
This week, a new Friends of Syria meeting is scheduled to take place in Morocco, a country that has been hailed as a model for other Arab countries. Is that assessment correct?

In February 2011, thousands of protesters, spearheaded by the February 20 Movement for Change, inspired by Facebook and Twitter and by their neighbours in Tunisia and Egypt, took to the streets throughout the country calling for what their Arab brothers were already (somewhat) achieving: democracy, freedom for political prisoners (notably Islamists), lower staples' prices and rights for minorities (notably Berbers). However,  as it has been the case in Jordan and Kuwait, they (for the moment) have never dare to challenge King Mohammed VI's rule (dubbed "the reformer" or "the king of the poor", even though, according to Forbes, he is worth $2.5 billion), also probably because questioning the King's authority is illegal. The regime tried at first to quench the protests (though not resorting to harsh repressive means like other counties did), but after weeks of ongoing demonstrations and growing pressure coming from abroad, the King gave in and (unlike other Arab leaders) swiftly accepted to amend the Constitution in a hallmark televised speech, under one condition: the process would have to respect his own terms.

As a result, the rushed through Constitution would reduce the King's powers, therefore allowing the definition of a new system in which the President of the Government (actually a Prime minister, we have a similar figure in Spain) is picked by Mohammed VI amongst members of the party with the majority of seats in Parliament and has an enhanced role: he is able to appoint ministers and even to dissolve Parliament under certain circumstances. The judiciary would also be granted independence (although judges are nowadays voicing their dissent. While the old text stated that "the King's person is inviolable and sacred", in the new Chart the King's person is no longer described as "sacred" but only as "inviolable". The Constitution would thus provide for the implementation of something similar to a "balance of power. A referendum was consequently held on 1 July, the Constitution was overwhelmingly approved, and both internal and external actors (barring certain figures within the opposition) seemed satisfied. Elections followed on 25 November, and Morocco's moderate Islamists, the Justice and Development Party, won in a landslide, achieving what they branded "a breakthrough without bloodshed".

The Islamist Government is nonetheless nowadays accused of being too inexperienced, as well as of ignoring the promises they made at the time, chiefly the one concerning bringing about constitutional reform. In this sense, some believe they are afraid of any kind of confrontation with the King. Prime Minister Abdelillah Benkirane constantly pledges his loyalty to the king, proclaiming the two have a good relationship. But at the same time he accuses an invisible hand of "undermining each effort coming from the Government". A key question has therefore aroused: does the Islamists' "third way" represent a real alternative, or simply a mere cosmetic change tantamount to return to the status quo (The Arabist spoke about a "mere rearrangement of the furniture")?

The truth is that things haven't changed that much: power ultimately lies in the King’s hands. The Monarch remains head of the Council of Ministers, which must approve all legislation, and the Ulama Council (a body that controls fatwas and oversees the content of sermons at Friday prayers). He has the exclusive right to run matters of "strategic importance" (military, security and religious affairs) and possesses all the powers granted by his status of "Commander of the Faithful" and descendant of the Prophet Mohammad. The King also chairs the Supreme Council of the Judiciary and a new National Security Council. Moreover, other parties linked with the former regime are also part of the PJD-dominated Government, stressing the fact that there has not been a complete breakout with the previous regime. The proof is in eating the pudding and PM Benkirane's office remains in the secretive royal palace's premises.

More worryingly, and in spite of several intermittent reforms that kicked off under the King's late father Hassan II (however remembered and loathed by most Moroccans for his harsh and often brutal rule), Morocco faces nowadays several problems: a dire economic situation, plummeting tourism, lower remittances coming from Europe, frustrating extensive corruption (particularly when it comes to the King's inner circle, the makhzen), a critical social situation, rampant illiteracy, violations of human rights (denounced by a UN report saying that torture in Morocco "is systematic for cases involving anti-government demonstrators and those accused of terrorism")... The PJD's electoral slogan "All against corruption and absolutism" has been today deprived of any kind of meaning or significance.

Discontent, mainly stemming from three key figures such as the youth, the Salafists and the republican Justice and Charity movement, is increasingly making itself felt in the reign, but... will that ensue in radical change? Certain signs augur the worst: a divided opposition, longstanding tradition favoring stability, real allegiance to the King, and gloomy outcomes of the "revolutions" in brethren countries. According to many, the country is running on inertia. All in all, it seems everything has changed so that nothing really changes. 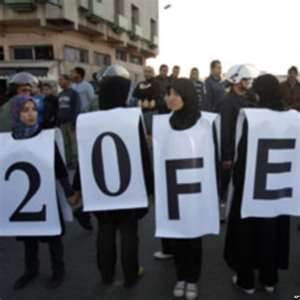