Watch out, Egypt's harassers!! My girls are watching...

It is beyond doubt that sexual harassment stands as one of Egypt's most serious problems. Well-known 2008 figures published by the Egyptian Centre for Women's Rights talk by themselves: sexual harassment has been experienced by 98% of foreign women visitors and 83% of Egyptian women. Moreover, 62% of Egyptian men admitted harassing women and 53% of Egyptian men blame women for "bringing it on" (worst of all, some men in the study said they harassed a woman simply because they were bored; one who abused a woman wearing the niqab said she must be beautiful, or hiding something). Not surprisingly, even veiled women who have been victims of harassment blame themselves.

Even though it was considered as one of the "priorities" of the former and very effective MB-dominated Parliament, no new law clearly defining sexual harassment as a crime, and thus making it easier for women to report it has been yet passed. The issue has been a blatant taboo within the Egyptian society for years, as women who have been sexually harassed have been too afraid or ashamed to speak up, but the debate was hugely sparked and light was finally cast on the problem after the "Revolution", during which hundreds of cases of harassment (together with the horrifying cases of "virginity tests") took place. And this "trend" has not changed a bit in the "new Egypt". Sometimes, the threat has been even more present in the face of bigger gatherings of people and worse security conditions. Weeks ago, cases of sexual harassment were reported after a demonstration against sexual harassment itself!!

According to some, this behaviour is the outcome of a mixture of increasing Islamic conservatism (on the rise since the late 1960s) and old patriarchal attitudes ("not the culture of the Pharaohs, but the culture of the Bedouins"). It's supposedly characteristic of an oppressed society where religion has been gaining a considerable weight, notably as a result of decades of incitement against women from the pulpits of some mosques, where both local and foreign women are often accused of not being modestly dressed, thus justifying violence against them in the name of religion. But dressing conservatively is no longer a protection. Even children attack you in the streets, and are sometimes supported to that effect by their fathers. What you see is what you do, and for the latter it is perfectly normal to "compliment" a young lady in the street, to insinuate themselves to a foreign girl who should be however used to it and doesn't deserve a more respectful treatment whatsoever.

Studying the roots of the phenomenon may be a way to eradicate it, but it's going to take years, even decades. And nowadays, I don't really give a damn about what Egyptian girls are going to go through in 30 years time. Don't get me wrong, I of course do, but I absolutely care more about what my friends and the likes have to face everyday. I have to be sincere here and admit I almost never felt threatened in that respect. I evidently was aware of the looks many men gave me, and I had to hear a handful of dirty words, but was never really worried about that. But my friends were, my friends are. Some of them are journalists and are sometimes afraid of going to Tahrir. Some of them do not want to go for a walk in the streets by themselves. Some of them feel compelled to wearing long sleeves and a scarf in the middle of the summer (more than what would be needed out of respect). Some of them have considered leaving Egypt for good, some of them have already left. And I am talking about the "rich expats", the ones who can afford taxis and don't have to take the damned 678 buses (movie I 100% recommend).

Several initiatives have been set up in order to improve the situation (Harassmap, Hands Off or Egypt's Girls are a Red Line, for instance), but I am particularly proud and hopeful when it comes to the one a bunch of brave women have given birth to: Tahrir Bodyguard. Particularly because it is not only aimed at raising awareness (something incredibly necessary, whatsoever) but also at actually protecting women who want to demonstrate, who want to exercise their rights as free citizens of their now free country. I hereby post their manifesto. Please bear it in mind, support it and spread the word. I wish them all the success they deserve. 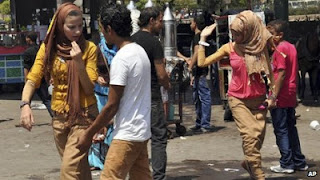 Who are we?
Tahrir Bodyguard is a non-political, anti-sexual harassment movement born from the desire to protect women’s rights and dignity so that they may express themselves without fear. We are a growing movement committed to working with other established organizations whenever possible to achieve our common goals.

What are our goals?
Our main goal is to ensure safety in Tahrir Square while demonstrations of any orientation take place. Due to the numerous sexual assaults on women we are specially committed to protecting their physical integrity.
In order to eliminate sexual harassment in the long run, we stress the importance of raising awareness and implementing effective policies that provide a valid solution to the problem, including efficient implementation of law enforcement by the police & judiciary system.
However, our priority now is to actively & pro-actively stop assaults – organized or not- on women during demonstrations. Tahrir Square is our priority. However, we plan to tackle other areas & hot spots where incidents of the same kind take place.

How?
- Prevention – in order to minimize the probability of an assault. – Patrolling, watchtowers, awareness raising through media, social media and communication on the ground…
- Incident management – to avoid any further damage to the victim, our aim is to quickly and efficiently remove her from the scene and take her to a place of safety where she can be looked after by trained and experienced people who will give her appropriate care.

Volunteers
Our volunteers will be assigned a task of their choice. We are looking for male volunteers to work as members of a team to patrol Tahrir Square and other high-risk areas on the ground or in watchtowers and to intervene as a team when incidents of sexual assault occur to remove the targeted women from the situation and take her to a place of safety. We also welcome all volunteers regardless of gender, background, religious or political affiliation to help with logistical coordination, awareness raising and capacity building of our movement. After accepting the conditions of the stipulated plan, volunteers must complete their job. By doing this, they will facilitate the activity of the other members of the team and help to build and strengthen the initiative.
After their recruitment, volunteers must undergo a thorough process of identification & background checks. We are compelled to do this in order to avoid any misunderstanding related to the liability of the volunteers. We will offer them uniforms and the necessary supplies, including protective helmets for the male volunteers in Tahrir Square.
Besides this, we will organize biweekly meetings and events to keep our team updated with any development that takes place.