By Unknown July 02, 2013
This is an incredibly moving first-hand experience of what is currently going on in Tahrir. These lines have been written by a dear friend of mine, Alexandre Goudineau, who is successfully making his way as one promising journalist and writes for former Egypt Independent/Mada Masr. It´s thanks to account like this that we outsiders get a glimpse of what Egyptians are going through. Thanks again, maestro!

"I had a very strange day yesterday and I felt necessary to write a piece on it.


Dedicated to all those who stand for their ideals, who risk their life to save their country.

Anti-harassment groups are the only organizations working on the ground and trying to preserve the dignity and the security of the demonstrators. Join them, help them if you can.

I had decided not to go to Tahrir today.

I do... not have to cover the event and I believe foreigners' presence in such event can potentially do more harm than good.

Following the news through the Internet, everything seemed ok, huge turnout. Trying to work without really being able to.

My friend gets back from the demonstration. He has been in every one of them since day one of the revolution. He is bitter. People are chanting for the police, he says. He was scared by some people down in Tahrir who seemed to be there just to harass and fight. Where is the 25th of January spirit gone, he wonders. We discuss about what the military will do, whether its interest is to keep Morsi as a public punching ball for some more time or drop him to satisfy the crowd.

I ask a friend who's in Tahrir if she's ok on What's app. She answers an hour later. She's trapped in a building with thieves with knives outside trying to get in. Panic. We try to call the whole earth to get her some help. Tahrir is packed, networks are down, anti-harassment organizations are there but outnumbered. I call her, impossible to get what she says. My friend says he’ll go.

I decided to go to Tahrir.

Before leaving we wonder if we take weapons. Can potentially do more harm than good, we conclude.

We run to Tahrir. Memories from the after-revolution flow. It's 9 and streets are packed. Flags in every hand, on every kid’s face. The same naive and joyful atmosphere, except that one wonders what people are celebrating this time. On the corniche police trucks are celebrated by the festive crowd. Completely surrealist scene in a country whose first gesture two years ago was to burn every single police station of the country.

More and more people as we are getting closer to the square. We slalom between the people, push some of them. We apologize first, but after a while we just go.

Close to Tahrir we get caught in a crush. A bunch of 15 year old kids with sticks throwing rocks at the people. We get around and continue.

Tahrir is packed. We go straight to the Hardees building where my friend is supposed to be. I follow my friend who is really stressed. He goes straight into one of the gatherings that are around Tahrir. We go cross the security who protect the women that sit in front of the stage. They start panicking as we rush into the group, the security runs at us, grabs us, my friend tries to explain but he can just shout at them, the security guys start beating us up. I get one or two kicks on the head, my friend more I believe. One of the guys gets something thin and blue out of his pocket, don’t know what it is, most probably a knife. My heart jumps. I grab my friend who is still trying to argue and take him out.

We arrive to the building. The anti-harassment groups control the outside. First relief. We get in. This building is used as a haven for victims of the demonstrations. Basic treatment is provided. Exhausted, bumped up people are inside while tension is still palpable. Most guys of the groups have been beaten up to defend the building.

My friend is nowhere to be seen. Her phone has been off for a while now. Tension grows. I finally call a friend who confirms me she's out of the building and that she's ok. Second relief.

I wander around inside the hall and the stairs. Everybody seems to be looking for reassurance. Some guys go down the stairs with clubs, the eyes frozen by sense of duty, surely also by the weight of some memories. I smoke a cigarette, try to relax. Fireworks explosions outside do not really help. A guy is sitting on the ground, fainting. He was beaten up. We lift him and make him rest on a small bench.

Don't really know what to do, what to think. Feel useless as the tension goes down gradually inside the building. Or maybe is it just me. My friend tells me I should go. He wants to stay and help. I execute and leave.

Back outside. Back to craziness. Noise, shouts, pure mess. I get caught in another scrum. People run everywhere, clumsily climb on the fences, two guys in front of me fall, I avoid them and try to get them back up. The movement then stops as suddenly as it appeared.

Electricity is in the air. Nothing stands anymore in the square. The ground is trashed. And people chant, launch firework, have their kids on their shoulders. A single fireshot, a single mob attack and everything turns into chaos. But it's ok, and people continue to flock into the square with smiles on their faces. Overexcited street kids mingle with the confident middle-class. Don't know whether I should admire or fear their carelessness. Both I guess. An army helicopter flies over the square and gets hailed by the people. Admiration leaves my heart for a bit.

I walk back home through Qasr el Nile and the Zamalek corniche. I've done this walk dozens of time. I need reassurance too, I guess. Feel like a bag of blood and bones.

Less noise in the cosy Zamalek. A convertible BMW passes in front of the laid down coffees with loud music. The guys inside wear V for Vendetta/Anonymous masks like the street kids who throw rocks at the police during the recurrent clashes. Don’t find the strength to smirk.

Get back home. I have reassuring news from my friend who's heading back home. Third relief.

I decided to write this story.

Everybody will keep good memories from today. The media will comfort that narrative. No people died in Tahrir today. Egypt revolution 2.0, peaceful protests, Morsi on the brink of collapse, and other striking posts have already invaded social networks. All these stories hold their share of truth.

My story will just be a black drop in the ocean. Meaningless. Nothing really happened to me. I did nothing. Saved no one. Didn’t see much. I am barely hurt by my own fault.

The posts of the anti-harassment organizations reporting the highest number of harassment cases since the revolution will as well be overlooked. The rape of an English female journalist that my friend was trying to save when she got trapped won't make much more noise neither. Or the fact that at every demonstration larger and larger parts of the attendance have nothing to do with demonstrating or with politics in general. And that what ignited the very revolution that the demonstration is trying to defend: the right to dignity, to freedom, are now being completely stepped on by so many so-called demonstrators. That Tahrir Square has passed in two years from an iconic, progressive stronghold to a touristic hangout to a strange, electric, sometimes gory place. Especially at night. Especially when you don't hold Y chromosomes. Some rare heroes try to prevent the unavoidable while being outnumbered by ten against one. My friends are two of them.

Tahrir has become a singular display of humanity: from an indescribable mess emerges the best and the worst of mankind. Where the noblest sense of sacrifice meets the sheerest brutality and animalish instinct. Sometimes in the very same person. My friend told me one harasser offered his djellaba to his victim to dress her up.

But bare individual sufferings do not matter much when History is at play. After all, it is pure logic the biggest demonstration in the history of humanity cannot go without some troubles. Blood is the essence of History.

But a bloodshed for what? To kick out a president whose power to implement any significant change on the ground has yet to be demonstrated, who ridicules himself a little more every time he delivers a speech, whose total failure is already acted and who just watches from his besieged palace the headquarters of his party being burned every other month?

And what next? Nobody knows. Nobody can agree on anything. Everyone will see the demonstration as a success for his own ideas, without realizing it is much easier to gather against rather than uniting for. It’s been two years and a half now that this narrow logic has prevented the formation of any credible alternative in this country.

But there is a bigger, darker story behind that.

A single logic has been at play in the country for the past two and half years: the Egyptian people have been blackmailed. The total disappearance of the security apparatus, organized shortages and the methodic dismantling of the economic activity and of the few social safety nets have brought people on their knees.

And, without any alternative, they are ready to forgive and celebrate those who killed and mistreated them not so long ago. 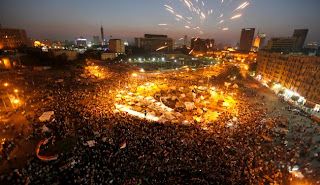