By Unknown July 19, 2013
You know I'm not the pessimistic kind of person, but the opposite. Nonetheless, every time I take a glance at what is happening in Syria, I am increasingly disheartened. For months the conflict has been dragging on, with hundreds killed each day and thousands fleeing towards neighboring countries (or worse still, returning to Syria out of desperation at the sight of the outrageous conditions the gigantic refugee camps put them in). Let's not forget about the xenophobic feeling towards Syrians citizens that is mounting throughout the region, particularly in Lebanon and Jordan, tiny countries truly incapable of giving shelter and providing staples to the ravaged families that get to their countries. Xenophobia out of sectarian hatred, xenophobia out of fear of spillover, xenophobic out of anger at what they consider is putting stability of the whole region under threat. People talk about a lost generation in Europe. Try figuring the future of a generation whose children cannot go to school, have lost half of their relatives, have been raised in detestation, will probably never see their houses again, whose girls are forced to marry older stranger men in order to cater for their families' needs...

Alas, while the most pressing problem so far has been stalemate (stalemate on the ground with minor land swaps between the rebels and the regime, stalemate within the opposition in exile, stalemate between the rebels themselves), the tide is turning and the outcome of the war seems to be taking shape. But not in the direction many amongst us would prefer it to head towards. The truth is that momentum appears to be shifting toward the regime. And after more than two years, even if nobody dares to admit it, that will relieve many stakeholders in the conflict, weary of hesitation and uncertainty. The dilemma here is that, as I've said many times before, this is an all-out war in the framework of which everybody is fighting until their last breath, aware of the dire consequences that may await them once the conflict is over. Does someone really believe the Sunni community, together with each and every person that has helped them in one way or the other, won't be harshly repressed anew? The end will not mean back to square one. The end will probably mean back to Iraq 2004 or, worse still, back to Hama 1982.

For now, it doesn't look likely that the regime will be able to regain control of the very whole country. But it does seem Assad and his hordes are putting their acts together and taking back what they once considered theirs. The Army is succeeding in recovering large swathes of land in the northern part of the country, mainly thanks to Hezbollah fighters (the turning point was most probably the battle of Qusayr), whilst retaining control of Damascus.

There are many reasons behind this turn of events. For once, while the rebels and the opposition keep begging for international cooperation, the West and other Arab countries (the latter, however, much more active in this sense) seem not willing or ready to provide, Assad keeps receiving military (both in fighters, weapons and training) and financial support from Iran, Hezbollah, Iraq and Russia. Remember that one year ago Assad appeared close to defeat? That line is no longer in fashion and, like the NYT states, the President now looks more confident than ever. His regime's resilience will probably allow him to secure a fief in central and western (where Damascus, Latakia and most cities lie) Syria. A Balkanized state always in the verge of never-ending unrest. Back to the square minus one, that is, the maybe necessary revision on the 1916 Sykes-Picot Agreement.

On the other hand, each body representing the ones who are fighting Assad seems to be in tatters. It's no wonder the "official opposition" (the representatives who are supposed to have the biggest said in Syria's future once Assad is overthrown) are showing the most heterogeneous low-profile image ever. They have been trying hard to reach this point for months. Does anybody know who's their new leader? Has anybody heard about their latest meetings? Has anyone wondered what will be the effect of the events in Egypt on the composition of the normally MB-dominated entity. What is most worrying nowadays is the state the "rebel side" (I really don't know whether I should keep using this expression) is in. The counter-regime side (better? not really, I know) is awash with rivalries between its several factions, particularly after the killing of a top Free Syrian Army commander, Kamal Hamami, by a rival Islamist group after meeting in Latakia with members of the Islamic State of Iraq and the Levant to "discuss battle plans". Great, we want outside powers to intervene, but these have shown incredibly vigilant of handing over weapons to extremist Islamists (all the more reason). So let's (we, these Islamists) killed a relevant figure and force them to preclude any kind of help, thus deeply jeopardizing our chances to win the war. Fighting between opposition groups had been increasing in intensity and number during the last months, and the FSA was confronted with three unsavoury daunting tasks: putting order within its ranks, distance a body supposed to fight for democracy from Islamist factions whose main aim would be to ultimately impose an Islamist state (they are already asserting control in large territories in the north), and oh, let's not forget waging a war against one of the most powerful armies in the region.

The Islamic State and the Nusra Front which, just like other Islamists across the Arab world, did not back the revolts until they were certain they were going to succeed, is now aware of its and its allies' military superiority and dares to claim the FSA are heretics no longer authorized to fight in the name of their country. Many of them count with funding from Gulf-based individuals. Some frustrated FSA fighters say they have joined Islamist groups. In the interim, they all lose ground on the battlefield and alienate the same citizens they say they want to save from Assad's grip. It is clear that waging a war under a unified religious umbrella is more appealing than merely calling for freedom and human rights. To win either a war or an election in the Middle East, you need a coherent narrative and a story to defend many individual feel identified with. And you need the cause you pledge alliance to to provide you and your brethren civilians with basic services in the areas these causes control, something the Islamists always excel to. Otherwise, bitterness will grow and residents of cities like Aleppo will blame the rebels for bringing then only destruction and suffering. It does not look very promising, does it? 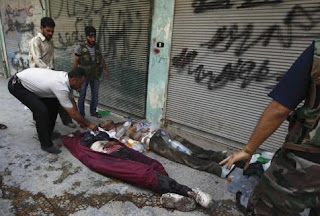