By Unknown October 20, 2014
Stefan Zweig said that "those who announce they are fighting for God are always the less peaceful men on earth." This is a quote that might well help many to understand the role religion plays in today’s Egyptian political scene. Religion had a lot to do with the July 3, 2013 coup: one of the pillars of public dissatisfaction the Army used as an excuse to overthrow Mohammed Morsi was fear that Egypt could become a theocracy at the behest of the Muslim Brotherhood. Religion is being used since then as a "weapon of submission" to the new regime: the new Constitution retains Article 2 of previous texts, according to which the principles of sharia are the main source of legislation prohibiting, though, the existence of political parties based on religion. After the 2013 coup, General Abdel Fatah Al-Sisi proclaimed all of that had been necessary to "save Islam and Egyptians from the Muslim Brotherhood." 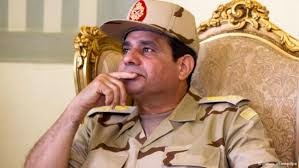 Sisi itself - unlike Hosni Mubarak but somehow following Sadat’s trail - often resorts to religious rhetoric. In its speeches, the President mentions almost systematically a Quranic verse or a hadith, setting himself as a devoted advocate of religion and somehow depriving the Brothers of what was until now their most prized weapon. The General’s background sheds some light on his behavior: he grew up in Gamaleya - close to Islamic Cairo. During the 70s, he witnessed the peak of Islamic resurgence, symbolized by the call (daawa) in Egyptian universities. Some even hint Sisi belongs to one of the many Sufi sects that still exist in the Egyptian capital, something that makes sense if you pay attention to his numerous mentions of dreams and signs.

The Muslim Brotherhood stirred the Egyptian religious landscape when in power: they dispensed with those imams that had dared be critical of the group, and there was talk of a certain "Brotherization" of the Ministry of Religious Endowments. Morsi’s government also tried - although unsuccessfully -  to unify Friday sermons. All of this covered by the1960 Law 157 which grants the Ministry administrative control over all the country's mosques. This legislation was never put in place before, for both social and financial reasons, and the various religious orders were the ones responsible of lifting up their respective representatives to the pulpits. The current Egyptian government has gone on to rely on this legislation to implement a series of measures, all in the same vein.

The first and most controversial consists in granting preaching licenses only to Al-Azhar  preachers or those who have graduated from institutions linked to the Ministry, consequently revoking the license to 55,000 freelance imams. The government prohibits preaching to more than 12,000 citizens without a license and all zawiyas (small neighborhood mosques) have been closed. It has also made titanic efforts towards unifying the content of Friday sermons, whose subject matter must be authorized in advance. The aim is prevent that mosques fall into extremist  or / and insufficiently skilled hands, under the pretext of modernizing the dialogue between Church and population resorting to issues such as environment or youth.

A key institution in Egyptian history has been playing a vital role in recent months: the Al-Azhar mosque and University, and its great Imam and rector Ahmed Al-Tayeb, regardless of their theoretical commitment to neutrality, stood behind the 2013 events. Its members were subsequently rewarded with substantive positions in the Ministry of Religious Endowments. It's not the first time this religious institution interferes in the country's politics, for Al-Azhar supported the 1952 revolution that overthrew King Farouq, accusing him of breaking the rules of Islam by trying to publish a fatwa that only benefitted his interests. Proof of this is the Eid Al-Adha discourse of former minister and Sheikh of Al-Azhar, Al-Hamadi El-Nawar Abun, entirely dedicated to Sisi’s figure, a move pretty consistent with the cult of the pharaoh - closely linked to the gods - still in force in Egypt.

The irony is that some amongst Sisi’s fans view him as the new Ataturk. Although he has been accused of trying to replicate Nasser and his ultra-nationalist vision - with mega-projects like the construction of a parallel Suez Canal - the current model circumvents all signs of the secularism the former president tried to instill in political life. An understandable approach if we take into account the role the Muslim Brotherhood has played since its creation in a society accustomed to mosques becoming a meeting place for political movements and starting point of demonstrations and protests.

The Egyptian regime has not only directed its attacks against the Brotherhood, but against other religious groups such as the Salafists - despite the support those have extended to the regime since the coup-, with provisions such as banning posters who asked if the Egyptians had already praised Prophet Mohammed (PBUH) that day hung by Al Dawa Al Salafiya. Many Egyptians are afraid the same thing happens to other minorities such as the Shiites or the Baha'is, or even the Copts, whose unconditional support for the regime has also faded as a result of arrests - Bishoy Kamel remains imprisoned for blasphemy - and the indifference of the security forces towards regular attacks the community is victim of.

Other measures might be inscribed linked to this trend, such as the establishment by the Ministry of Youth and Sports of a working group to combat atheism. In a country where the possibility of not believing in any God is difficult to understand for many, authorities assimilate this option to free will, in the absence of divine judgment. Something very difficult to combine with any kind of control of society.

This religious zeal has also been linked with increasing accusations of blasphemy and condemnation of homosexuals. Homosexuality is not prohibited per se in Egypt, but gays are charged with debauchery. Civil and religious authorities have also been positioned against ingrained habits like belly dancing or basic behaviour like online communication between male and female. A few months ago censorship of the film Noah caused great controversy , justified by the simple fact that the film represents flooding mentioned in both the Bible and the Quran.

The regime remains committed to fight any kind religious extremism, and Dar Al-Iftaa, responsible for issuing fatwas, was quick to condemn the recent actions of the Islamic State. Egypt faces today the worst wave of Islamist violence since the 90s, mainly directed against security forces. The Grand Mufti Ali Gomaa - in a recording leaked to the press - conveniently promised the military a place in paradise if they killed or were killed by Islamist militants. The current bitter struggle against jihadism in Syria and Iraq - in which Egypt has not hesitated to volunteer - greatly admonishes the "war on terror" flag the Army hoists since the overthrow of Morsi.

Minister Mokhtar Gomaa warned a few days ago of the threat posed by the Muslim Brotherhood still controlling part of Egyptian mosques. This line of thought merely demonstrates a serious lack of knowledge of the country’s history, along which the Brothers have used their status of marginalized and repressed actors - handed on a platter by the authorities - to create parallel channels and networks. Eliminating any means of expression and ways of conveying discontent (on the streets and in the mosques) entails a serious danger:  creating a parallel religious sphere that will little by little turn into an ideal breeding ground for radicalization, as occurred precisely under Nasser, masterfully recounted by Alaa Al Aswany in his book The Yacoubian Building.