Could the leader of ISIS be Jewish? And was Khomeini in fact a British agent? Researcher Itxaso Dominguez de Olazabal explores a world of conspiracies and finds (some) logic behind the craziness. 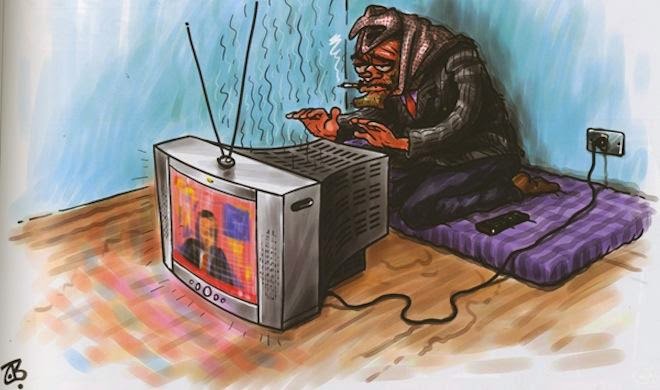 Chances are that while visiting Egypt you’ll hear a disconcerting anecdote whereby a shark attacking a Russian tourist in the coastal town of Sharm al Sheikh had been trained by Mossad. But of course, conspiracy theories are not unique to the Middle East; many of us have grown up with stories such as “Man never landed on the moon” or “Elvis is alive.” No one can however deny that such theories are tremendously popular among Arabs and Persians:

* Don’t fool yourselves, the Islamic State is a product made in the West, and Hillary Clinton detailed so in her memoirs.
* The United States allied with the Muslim Brotherhood in order to destroy Egypt. Morsi was planning to give away the whole Sinai Peninsula to Hamas.
* An episode of The Simpsons shows how the United States is to blame for the outbreak of the Arab Spring.
* The peace treaty between Egypt and Israel brought cancer, hepatitis and other diseases to the Arab country.
* Henry Kissinger devised a plan to have all Christians in Lebanon exiled when the Civil War broke out in 1975.
* The Saudi monarchy is actually Jewish. So was Gaddafi, in fact. Just like the Caliph Abu Bakr al-Baghdadi, whose real name is Simon Elliot.
* The US gave the final push to Saddam before invading Kuwait.
* Both Coca Cola and Pepsi beverages contain swine substances and alcohol.
* The "Samson Option": Israel has at its disposal nuclear weapons ready to be dropped on each and every country in the region.
* Khomeini, the one who led a revolution that put an entire country on guard against the West, was actually an undercover British agent.

WHEN ANALYZED in detail, conspiracy theories follow a particular pattern. In most cases, they refer to notable events. They also display a dualistic worldview and continuously resort to accusations against Israel and/or the West (both depicted as the great Satan), which, according to the Roman principle cui bono, have every chance to be the main beneficiaries of the region’s misfortunes. On the other hand, they are in effect theories, theories that are not falsifiable and thus cannot be scientifically refuted, making it much harder to fight their existence.

The funny thing is that these theories are not widespread only amongst the “mob.” Renowned intellectual and political figures also endorse them, as is the case with many politicians who still claim that 9/11 was devised in and by the United States. And when it is not the authorities who disclose them, it is the authorities who decline to deny and rather tolerate them, contrary to the usual practice in other countries. This shows the important role the media plays in most cases, gagged by the corresponding regime. Furthermore, social networks allow the most outlandish theory to reach unprecedented levels of diffusion. Unresolved dilemmas such as the 2005 assassination of former Lebanese Prime Minister Rafik Hariri do nothing but stoking rumours and conspiracy theories, thus turning into a catch 22.

Just as war is, according to Clausewitz, the continuation of politics by other means, conspiracy theories are, despite their derisory nature, a political instrument, a useful prism when analyzing the relationship between governments and societies in the Middle East. For citizens, these theories represent a way of expressing their frustration and impotence due to the opacity of decision-making – indeed characteristic of regional governance. At the end of the day, these theories depict the leaders in charge as victims rather than wrongdoers. They are also a valuable instrument of domination, a way to test the loyalty of the public that diverts attention and ensures their commitment and unity against external enemies. Saddam Hussein made a masterful use of such during the Gulf War.

THESE THEORIES describe attacks not against clearly defined leaders, but against populations who have the moral obligation to remain faithful to their nation. And if loyalty is not the immediate aftereffect, citizens feel at least compelled to grant recognition to their leader, the only one who dares to fight the dominant orthodox mindset, to resist the common enemy to the value and strength of the Arab people. Gaddafi's speech before the United Nations General Assembly in 2009 is very illustrative in this sense, strewn with gems like the accusation whereby swine flu was a military attack the ‘developed world’ was to blame for. In view of examples like this, we cannot help but wonder whether some leaders come to believe their wild hypothesis.

"The funny thing is that these theories are not widespread only amongst the 'mob'..."
Resorting to simplistic and orientalist considerations should nonetheless be avoided when it comes to conspiracy theories, since they do not represent a characteristic pathology of the Arab people, it is simply not the means through which they explain - and exonerate - their mistakes. (Authors like Daniel Pipes, for example, attribute their existence to an anti-Western and even undemocratic Arab trend). Conspiracy theories may have been oftentimes nurtured by ignorance, rooted particularly in an insufficient knowledge of history. This is however due to deficiencies in the educational systems of the countries themselves, something their leaders make the most of (a symbolic example here would again be Lebanon). Nevertheless, this is not always the case: as Czeslaw Milosz pointed out in his book ‘The Captive Mind’, referring to the Soviet intellectuals, the main feature of this mentality is that their victims end up being afraid of even thinking for themselves.

Taking into account the weight of history on these populations is vital here. So is never forgetting that in the past they have been, as a matter of fact, silent witnesses of conspiracies, such as the Sykes-Picot agreement, the overthrow of Mossadegh or the 1956 Suez crisis. Mistrust is therefore largely understandable in the face of a West guilty of broken promises and neglect. Not to mention a continuous foreign interference. Lebanon, a country where conspiracy theories have become commonplace, stands today, as it did yesterday, as a symbol of the meddling of most countries in the vicinity.

Arab societies have been raised on the idea of ​​secrecy: regimes, sex, architecture (as evidenced by its high walls), differences between sects and communities... This sort of theories is therefore born out of scepticism towards authority, politicians and the state: being an Arab citizen, you get used to being lied to. And, sometimes, institutional reality is so labyrinthine that resorting to simplistic theories is just easier. Last but not least, conspiracy theories are also emerging as a unifying tendency to changing ideologies – Pan-Arabism, Islamism, Socialism, Africanism – within constantly fractured societies. Czeslaw Milosz also spoke about a certain "comfort" the dream brought to victims of the "captive mind". A consolation, however, that still eludes most citizens in the region.

This article was published by YourMiddleEast on April 2 2015.