No one is innocent these days... (updated)

By Unknown September 14, 2012
A ridiculous film ("Innocence of Muslims") has sparked a heated reaction throughout most of the Muslim World, outrageously entailing the deaths of four people in Libya, other deaths in other countries, and dozens injured elsewhere, as María Sánchez Muñoz reported on her note. This events are also fanning debates on various issues: is Al-Qaeda involved in some of these attacks? Is there an actual link to the "Arab Spring"? What should the U.S. (and particularly Mr Obama, completely immersed in its campaign and an easy target for the Republicans) do? What should the leaders of these countries (all eyes on Mr Morsi, again) do? Are we bound to face similar issues every few years (remember the Danish cartoonist´s controversy? At least there was some quality in these drawings!) or is there a rational way out?

It all started in Cairo, where the grand mufti of Egypt spoke out last Sunday against a film that he condemned as "offensive to all Muslims". Protests broke out in Benghazi and Cairo on Tuesday 11/9 (coincidental?) and did go on in Cairo the next day, where more than 220 people were injured (and reportedly one died on Friday). Protests erupted on Thursday and Friday in other countries. In Yemen, hundreds of protesters gathered around the U.S. embassy, setting fire to tires and cars, and scaling the walls, until the police opened fire at the mob, killing four of them (if Al-Qaeda was behind the attacks in Libya, let's wait and see what they will do in Yemen, as they are much more infiltrated in the country. In Palestine, protests against the film add to the present uprising. In Iran, scores of youths protested in front of the Swiss Embassy (representing U.S. interests in the country since 1979), supported by their supreme guide, who has already accused the U.S. Government of standing behind the heinous film, or at least of not having prevented its diffusion (BTW, I heard there was only a screening of the video, and very few people attended, it's not as if it was Batman or something!). Mobs also tried to storm U.S. official buildings in Bangladesh. Incidents also took place in Iraq and in Afghanistan, attacking in the latter the base where Prince Harry was stationed (I wonder what could these populations hold against the U.S.? Mmmm). In Tunisia, four people have been killed, after huge fights erupted between the angry protester and the security forces, who used real ammunition, and in Lebanon (particularly in Tripoli) the death toll reflects one death so far. Even in Nigeria there have been threats of an eventual attack and U.S. citizens there were advised to stay home on Friday, especially during the prayers. Tumultuous Sudan has also been a key player, refusing additional American help, even though three person have died so far and other countries' interests (Britain's and Germany's) have been attacked, instigated by a sheik exhorting protesters to avenge what he called anti-Muslim graffiti on Berlin mosques. Demonstrations also took place in non-Arab countries, mainly in Australia, Bangladesh and Indonesia.

Now it seems calm has taken hold, even though Al Qaeda (in particular its Saudi and Yemeni branch) called on Saturday for more demonstrations directed against American interests all over the region. The terrorist group has not only talked about mere protests, but has incited its followers to destroy American embassies in order for the population to be finally free from "American hegemony", and they have even called for further murders of American diplomats

On the one hand, leaders in some of these countries (evidently, not Iran!) condemned the attacks, and moreover have already promised to open inquiries on what happened. They have also pledged to arrest the culprits (Libya seems to be already delivering). But it's that enough? Moreso if we take into account how some authorities have reacted to the film itself... In Egypt, the President has followed a somewhat "bipolar" path: there has been no blunt formal condemnation of the incidents, only conciliatory statements, but there has been talking about a "red line" that should not be crossed when it comes to religion (“We all reject any trespassing or offense to our Prophet Muhammad”). [At least until Obama was on the phone]. Moreover, mass protests across the country were called for by the Muslim Brothers on Friday (we closely followed the outcome, and not much people did actually show up), thus guaranteeing the spread of unrest. Saudi Arabia has both decried the violent attacks and the "work of art". Both Iran (Khamenei called the film "a grave and unforgivable sin" and a "dirty crime") and Hamas in Gaza (Hamas government issued an official condemnation of the film, urging the Arab League and the Organization of Islamic Cooperation to take a “strong stand” and sue the producers for “harming all of humanity” in its denigration of the Prophet Muhammad) have demanded a formal apology from the U.S. President Karzai in Afghanistan discussed the “film and the insulting of holy Islamic values”. Lebanon's former Prime Minister Saad Hariri condemned the film that "deliberately offends Islam and the Prophet". Access to the video (at least, through YouTube) has been banned in many states.

Well, that leaves the world in the exact same situation as in 2006 (Muhammad caricatures) and 2010 (burning of Quran's affair). That is somehow inevitable, for we inhabit a globalised Internet-dominated world in which (barring some cases, for example China and North Korea, among others) all kinds of information can be delivered and consumed anywhere, anytime. There is no way of preventing the posting of a film/article/speech... that could hurt other people's feelings. And, anyway, that is a positive thing! Those filmmakers are probably the worst artists in the world, but should not be punished in the least. What is one of the main characteristics of a democratic society, like the one the Egyptian people was asking for in Tahrir one year and a half ago? Freedom of speech. And the latter goes hand in hand with religious freedom. There it is, it is simple. The response to what some could consider stupid ideas is not censorship – it is more speech. Scores of people (particularly, illiterate people, like an astounding minority in Egypt) will remain being driven by their religious leaders' harangues. But this is where an elected leader (I am talking about democracy here, even though this should be the case everywhere) should step in, that is where the red line stands: respect, self-control and maintaining of the peace. 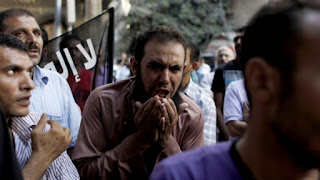