By Unknown September 20, 2012
In my last article, I underlined the importance of protecting and respecting freedom of speech. But, as it often happens with most freedoms and rights, there is a limit not to be crossed. And where does that line (not talking about the one Mr Morsi referred to last week) stand? Well, now we all have the chance to reflect about that, thanks to a French Magazine, Charlie Hebdo, which decided to publish -clearly having in mind the wave of unrest ravaging several Muslim countries- caricatures mocking the Prophet. In my opinion, the choice of words of a survey by The Guardian says it all: "free speech or sheer folly?".

The first word that came to my mind was "irresponsible". One of the immediate consequences of the cartoon's publication has been the putting in place by the French Authorities of an strategy whereby security at their embassies and public buildings (not only consulates, but also schools and "instituts français", that had and will have to be temporarily closed) throughout the world has been reinforced and their citizens have been warned of possible attacks. Jean-Marc Ayrault, France's prime minister, stressed his "disapproval of all excesses" and called on everyone to "behave responsibly". Foreign Minister Laurent Fabius said he was "against all provocation".

The publication has brought condemnation from different stakeholders. Essam Erian, former Chairman of Egypt's People Assembly's Foreign Affairs Council and acting head of the Freedom and Justice Party, surprisingly compared the case to that of the pictures of the Duchess of Cambridge: "If the case of Kate is a matter of privacy, then the cartoons are an insult to a whole people. The beliefs of others must be respected". Another MB spokesman, Mahmoud Ghozlan, said France should deal with insults against Islam in the same way as it deals with Holocaust denial: "If anyone doubts the Holocaust happened, they are imprisoned, yet if anyone insults the prophet, his companions or Islam, the most (France) does is to apologise in two words. It is not fair or logical".  In Morocco, the Minister for Tourism has affirmed that freedoms of speech entails a certain degree of responsibility, calling the provocations "islamophobic and stereotypical". In Tunisia, Islamist party Ennahda has backed the right of Muslims to protest resorting to any peaceful means against a hateful provocation that aims at derailing the Arab Spring

Moreover, religious authorities have also responded and, contrarily to what some could expect, they have not called for further demonstrations, but instead for calm and self-control (Bravo!). The Grand Mufti Ali Gomaa wrote an article for The Washington Post saying that any insult to the Prophet will be "taken seriously", although in a "peaceful and legal way", and wisely declaring "We must instill his values deeply in our souls,” he added. “One such value is to respond to provocations and foolish acts with patience”. Dalil Boubakeur, the senior imam at the Grande Mosquée de Paris, appealed for France's Muslim community to remain calm and not "throw oil on the fire". The Vatican's official newspaper has qualified the move as "moot" and unnecessarily fanning the current tensions.

Others have asked the Muslim Community to act with restraint. Arab League Secretary-General Nabil Elaraby said those who were offended by the deawings should "use peaceful means to express their firm rejection". It was Elaraby himself who informed the press about the League's preparation, together with the Organization of the Islamic Conference, the European Union and the African Union, of  an anti-blasphemy legislation, in principle limited to a "political and diplomatic gesture". "States should not be blamed for the insults to Islam uttered by some individuals", he said, adding the project is almost ready to propose an international agreement criminalizing blasphemy and insults to religious figures

This is not the first time Charlie Hebdo, that has repeatedly been accused of having become more anti-Islamic than anti-clerical, puts itself in the spotlight. Last year, their Paris office was firebombed after their publication  of a special Arab spring edition entitled "Sharia Hebdo" featuring a cartoon of Muhammad on the cover as "guest editor" saying "100 lashes if you don't die of laughter!". In 2006, the French Council for the Muslim Faith brought a lawsuit against the magazine  for publishing caricatures of the prophet accusing them of being "very  violent". And in 2007 they reprinted  the famous Danish newspaper's cartoons and (again) sparked protests worldwide. 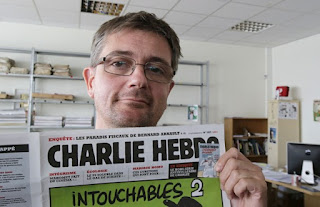 The move was clearly a provocation... An ill-chosen time provocation. An unnecessary one. What was the real aim of publishing those cartoons? Charlie Hebdo's editor said the decision was in keeping with France’s "proud history" of secularism. How does that help achieving that honorable aim? When writing his controversial Satanic verses, Salman Rushdie has always sworn he never thought he could spark such a huge amount of rage. I'm sure even the filmmaker behind "Innocence of Muslims" had not imagined what the reaction could be (above all, because it was produced months ago). The people in charge of Charlie Hebdo were perfectly aware (even though not afraid) of the probable consequences of their actions, and did not add the slightest useful element to the ongoing debate. French author Voltaire would probably disapprove of what has been said, but I doubt he would have been able to "defend to the death" his compatriot´s right to say it.