The Pope´s visit to the Middle East

By Unknown September 16, 2012
Pope Benedict XVI has winded up a successful three-day visit to Lebanon, where he has delivered a vital message of tolerance, particularly relevant in view of the current violence ravaging the region. The visit was not without incidents, though. In the northern city of Tripoli, where one demonstrator was killed, angry mobs, following the example of their neighbours protesting against the film "Innocence of Muslims" (the Pontiff has made no reference to it but the Vatican did condemn it) chanted "we don't want the Pope" and "no more insults".

Lebanon, also called in the past the "Switzerland of the Middle East" can easily be described as one complicated religious mosaic: more than 30 percent of the population are Christians, divided into more than a dozen churches (only six of them linked to the Vatican). The Muslim majority, for its part, includes both Sunnis and Shi'ites in a similar proportion, as well as Alawites. Indeed, governing this country has always been a difficult balancing act that during the 1970s and 1980s derailed into a bloody civil war. The Pope praised Lebanon as a model: "like me, you know that this equilibrium, which is presented everywhere as an example, is extremely delicate", he said, adding that "sometimes it seems about to snap like a bow which is overstretched or submitted to pressures which are too often partisan". "This is where real moderation and great wisdom are tested".

Surprisingly, the Pope also made reference to the "Arab Spring", which he described as a "cry for freedom" in an extremely optimistic way: "I would say it’s a positive thing: it’s the desire for more democracy, more liberty, more cooperation and a renewed Arab identity", even though he added "there is always a danger of forgetting a fundamental aspect of liberty: tolerance for others and the fact that human liberty is always a shared liberty"(source: New York Times).

The Pope has been warmly welcomed during his visit, particularly by cheerful youths coming from all over the region. Therefore, he did not only address Christians, but also Muslims: "together with young Christians, you are the future of this fine country and of the Middle East in general. Seek to built it up together!" Actually, he met with leaders of the Sunni, Shi'ite and Alawite Muslim communities, as well as those of the Druze (even representatives of Hezbollah attended the mass!), and was praised by them: for instance, the Supreme Sunni authority Chief Mufti Mohammad Rashid Qabbani said that "the flight of Christians hurts us Muslims because it means we cannot live with others". 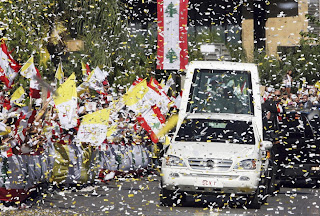 Indeed, the main aim of the trip was to bolster the situation of the various Christians minorities in the region, whose numbers have been plummeting over the last decades, mainly because of wars, persecutions and occupation, that have cut Christian ranks to 5 percent of the Middle Eastern population compared with 20 percent a century ago. In this respect, the Pontiff affirmed that "a Middle East without Christians, or with only a few Christians, would no longer be the Middle East", evidently referring to the centuries-long presence of this religion in the area, and the deep roots of it in various sites (as he said, Middle Eastern Christians have the honor of living in the region where Jesus was born and where Christianity began). Benedict XVI also had a key message to deliver: he called for Christians not to leave the region despite continuous infighting and growing pressure from radical Islamists.  In order to counter the declining in the numbers of Christians, and to thus avert "human, cultural, and religious impoverishment", he called for the granting of equal rights and full citizenship. In this sense, he also urged the region's young Christians not to "taste the sweet bitterness of emigration".

The Pope, as many expected him to do, tackled the Syrian issue (taking into account it could easily spill over its neighbouring country), mainly demanding restraint from both sides, asking them to put an end to violence, focusing on a halting to arms imports, using inspiring words to that effect: "instead of importing arms, which is a grave sin, one should import ideas of peace, creativity, find solutions for accepting everyone in his otherness". Benedict XVI reminded young Syrian Christians in the crowd "the Pope has not forgotten you". He was undoubtedly addressing the difficult situation the Christian minority (about 10 percent of the population) is going through these days in the country, compounded by their fearing reprisals if Islamists ultimately come to power and terrified by the violent attacks they have been the target of (in Homs, many Christians have been chased and thrown out, and churches and convents have systematically been destroyed so as to prevent their return).

Christians seem to be under threat in many countries of the region. Christians in Egypt (Coptic Christians), about 10 percent of the population, are also facing a sensitive situation, as they have come under repeated attacks by Islamists since the overthrow of Hosni Mubarak and worry the new Muslim Brotherhood-led government will impose Islamic law, mainly through the constitution in the making. Besides, there has been an outstanding exodus of Christians in Iraq, where they amount to about 450,000, while they represented 1,500,000 of the country's population in 1990. 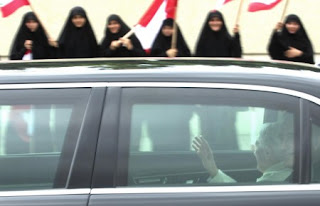