A Palestinian Reconciliation in sight?

By Unknown September 21, 2012
A delegation of Palestinian representatives has been visiting Egypt. Apparently, Palestinian Prime Minister Ismail Haniyeh met this week with Hisham Qandil, Egypt's Prime Minister, in Cairo. They discussed various possibilities to lift the siege of the Gaza Strip, one of the electoral promises of the Muslim Brotherhood, and even addressed plans are to develop a free-trade zone between both territories. They surely debated on the tunnels' issue, used for smuggling goods and people across the border, a huge source of problems (amongst many) between Egypt and Israel. Palestinian leaders in the Strip estimate the value of trade to be $2 million a day (of which Hamas takes 7% in taxes) and therefore consistently oppose this possibility: "not even under ousted president Hosni Mubarak did Egypt think of crippling all the tunnels without providing an alternative", senior Hamas official Mahmoud El-Zahar told the Egyptian newspaper Al Ahram. Khaled Meshaal, head of Hamas' political bureau in exile (currently based in Damascus, even though the movement is set to move its headquarters soon after refusing to publicly support Syrian President Bashar Assad), was also Cairo-bound, with the aim to continue meetings with Egyptian officials, including President Morsi himself.

This will be the first time both leaders visit Egypt in the same time (it is well known they are not in very good terms, each embodying different stances within the Islamist movement, the same thing happening within the Palestinian Authority between Abbas and Fayyad), and both are expected to leave the country today. Hamas is set to choose a new chairman for its Political Bureau before the end of this month, and both are believed to be key candidates to lead the second highest institution of Hamas (after the Shura Council), after the holding of secret elections amongst its members (apparently, even inside Israeli prisons!). Mashal resigned from his post earlier this year and promised he will not run again for its top post. In spite of this, he remains one of the front-runners, justifying his move by citing the situation in Syria.

Could there be another issue to talk about, precisely in Cairo? I think so, for Egypt has been a key player in what has been called the "Palestinian Reconciliation Process". As a consequence of the fatal break-up between Hamas and Fatah in 2006, the Middle East Peace Process has found itself enormously in jeopardy. How could negotiations go on without a clear unified sole representative (defending a single stance) sitting on one side of the table? Cairo (negotiations started under Mubarak) was behind the signing of both the 2011 reconciliation agreement of May 2011 and the 2012 Doha deal by Mahmud Abbas and Khaled Meshaal, however sometimes described as "stalling". In the initial agreement, both parties pledged to put in place a "transitional" government of technocrats before forming a joint caretaker government, after the holding of presidential and legislative elections in 2012 (initially foreseen for the month of May), and also allowed for the entry of Hamas into the Palestine Liberation Organization and the holding of elections to its Palestine National Council decision-making body. Nonetheless, negotiations stalled over the anointment of a single Prime Minister, Hamas rejecting the appointment of Salam Fayyad.

For its part, the February Egypt and Qatar-brokered Doha deal represented a huge step forward in trying to solve the main issues at stake, even though, in this case, the deal hung up again over disagreements concerning Abbas' eventual heading or not (both as President and Prime Minister!) an interim government that would prepare for elections. On May, a new timetable for a power-sharing deal was agreed, apparently envisioning elections in about six months. As of today, several commissions (although surrounded by secrecy) are officially laying the foundations for the implementation of the accords. In this respect, Abbas, during a recent press conference, said that "reconciliation between factions means holding elections" and added that "there will be no further dialogue with Hamas unless the electoral commission resumes voter registration in the Gaza Strip". Was he hinting the looming of another impasse?

Egypt's President Morsi has, ever since the outset of the talks, repeatedly expressed his support for the "Palestinian cause" and has consequently called on the feuding factions to reconcile, stressing the importance of Arab support for the Palestinians, an endorsement absent over the last decades but actually vital for any kind of real step forward. Besides, and regardless of any advance being made, it is important to note Israel has repeatedly rejected the agreement, for it refuses to negotiate with a government involving Hamas, whose Charter calls for the destruction of Israel (meanwhile the Palestinian Authority has already recognised the state, I wonder what could be done about that?). 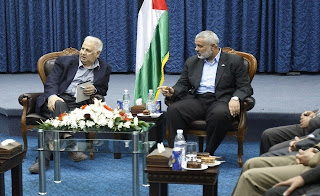 P.D. Beware, Egypt! It seems you might find a rival in this race as deal-broker not only in Qatar (and even Jordan), but also in Iran. The latter has recently (in particular, on the sidelines of the Non-Aligned Movement Summit we already talked about) offered its services as mediator to end the Fatah-Hamas power struggle.