On Assad's electoral campaign: "Together"

By Unknown May 28, 2014
Syria officially opened its presidential campaign on Sunday May 11th, and the cities and towns under the regime's control are filled with billboards and posters presenting portraits of President Bashar Al-Assad. Others, such as the ones hung in Thawra Street in the center of the capital, show either his portrait dressed in a grey suit and blue shirt or the Syrian flag overlaid with the word "together" and the President's signature.

In Damascu's Sabaa Bahrat neighbourhood, one billboard proclaims: "We won't close our eyes until we have said yes to the ophthalmologist" - Assad is an eye specialist by training - "We vote for you, 2014". Elsewhere, posters read "our Bashar, we will not accept a president other than you. We have chosen you, you have our loyalty". The campaign is also flooding online media with messages of support for Assad - by the first morning, the Facebook account had garnered 65,000 likes and the Twitter account nearly 1,000 followers. Cars cruising the capital's streets blast patriotic songs as their passengers fly the national flag and photos of Assad. 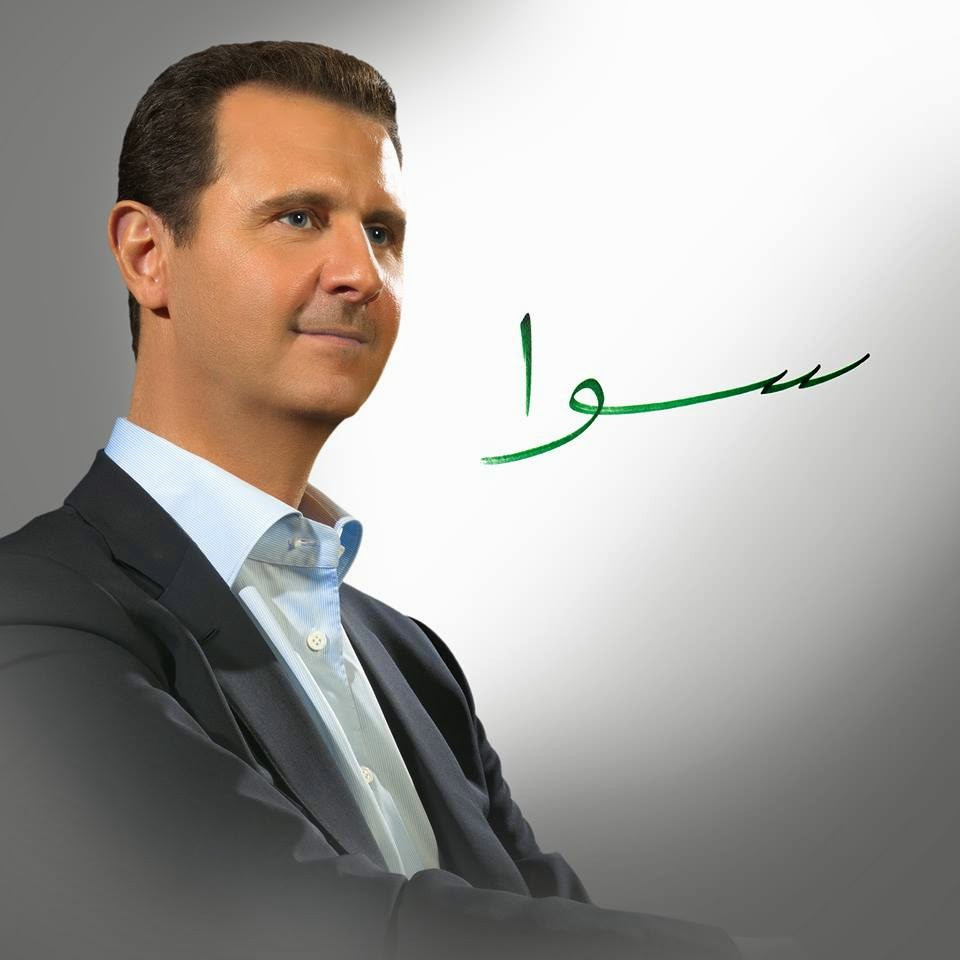 Photos and banners of the other two candidates, Hassan al-Nuri Maher Abdul-Hafiz Hajjar, are extremely uncommon. Even so, regime loyalists have gone to the extent of vandalising their posters to show their anger at the possibility of anyone other than Assad becoming President. Actually, one of the other two candidates,  al-Nuri, former minister is believed to be the man behind the electoral campaign (the other one,  Hajjar , is the author of an article entitled "Assad, or no one"). This is Beyrouth, but it could well be Damascus

In a country where propaganda has never really been the regime's main concern and the campaigns had a certain vintage whiff, the situation on the ground clearly called for fresh air, for a true facelift. Even though the change started in 2006 through a campaign promoting "participatory democracy", the modernisation of the regime's speech became in 2011 a matter of survival stricto sensu.

Already in May 2011, Syrian authorities launched an impressive campaign calling for support of the Syrian President much more "modern" than the electoral campaigns of 2000 and 2007, when it came to both the tone and the means. The (paternalistic) message remained essentially the same - the President was the only one capable of saving the country in flux -, but the language was closer to the Syrian youth's dialect and the visual elements looked much more modern and even felt kind of Westernised (something ironic if we take into account that Syria was already accusing the West of unconsciously supporting the rebels). 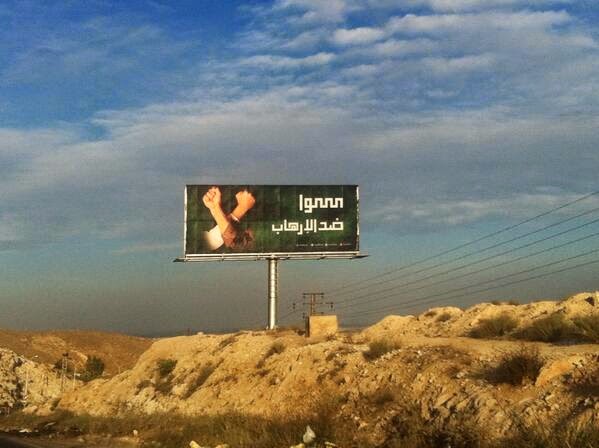 The 2014 campaign is for the first time a professional campaign. It's a campaign that has resorted to all useful means - not only banners and pamphlets, but also TV ads, social media, electoral merchandising, and even a new patriotic tune. It's a campaign that, instead of "shelling" potential voters with a crystal-clear message, has opted for the technique of exciting their curiosity by releasing simple images and videos that do not try to convey an instruction but to arouse their patriotic sentiment.

Moreover, it's an incredibly modest campaign that does not make use of inflammatory statements like the ones Assad used to harangue its constituency with. Instead, and with either a dispassionate - in light blue (like his tie-less shirt) or light grey - background (chromatography is the key to any good advertisement!) the campaign rather conveys a message of tranquillity - the calm only Assad is able to guarantee. No signs of the violence and soldiers - from one side or the other - that are nowadays ravaging the country whatsoever.

Beyond the shadow of a doubt, the wisest feature is its choice of name: Sawa (Together in Arabic) that stresses the role the Syrian people - especially those who have remained by the regime's side - are playing throughout the conflict. The motto also obliterates, up to a certain extent, the figure of the presidential candidate, which in certain banners is only suggested through a mere handwritten signature. Neither the Syrian individual nor Assad himself are the one who vote, rebuild the country and fight against terrorism. It's the people - a collective "we" - who does all this, who keeps the Syrian spirit alive. The people, as the campaign videos show, composed of men and women, of children and elder, of builders and teachers, of the elite and the peasants - stressing the proud legacy of the Baathist socialist imaginary. As a matter of fact, some of these videos make the same mistake as many campaign against the regime, exploiting the innocence of children (the ones who will really have to rebuild the country) who aim to represent the purity of the advertiser. Even the titles of the videos- "Together Stronger", "Together, we will build it", "Together, it returns more beautiful", "Together against Terrorism" - are carefully pick, for they play on the gigantic tasks the likely winner will face after the vote. Tasks for which his regime won't have enough money to - paradoxically, whichever foreign power foots the bill will most likely demand a political price. In truth, the videos depict what the Syrian people will do once the war has finished - once the war is won.

Underscoring those efforts, anti-Assad activists have launched their own campaigns online, most of them under the slogan #BloodElections. A Facebook page shows a hand placing a vote in a barrel dripping with blood (a reference to the crude bombs the Syrian military has often being accuse of using on rebel-held areas). "The farce of elections under Assad's barrel bombs" the slogan reads. 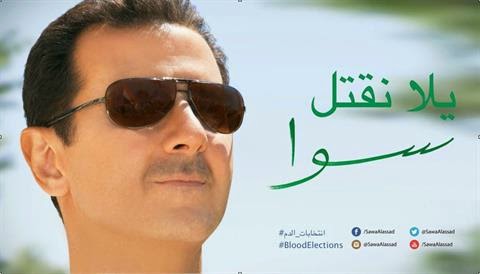 Other activists are filling online spaces with a string of mocking messages in response to the charade they consider the elections to be, like "The elections of blood", "Lower your voice" or "Together, we will bury him". 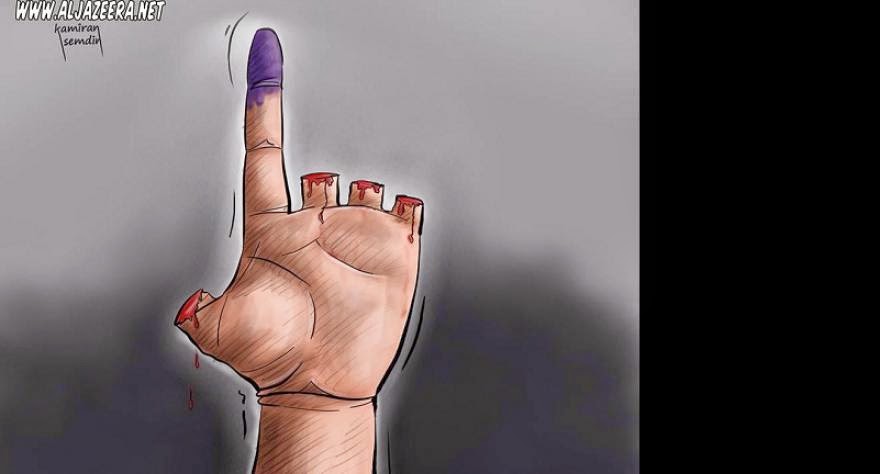 The right to have a say in the future of their country (in part, to participate in its elections) was one of the reasons that millions of Syrians took to the streets in March 2011 and afterwards, and thus one of the reasons why so many have lost their lives since. Assad and its regime have managed to turn their dream into a bad joke.