Abbas' all or nothing

By Unknown November 29, 2012
Mahmoud Abbas, President of the Palestinian National Authority, announced on 12 November during a LAS meeting that the request whereby the UN General Assembly would grant Palestine enhanced observer status would be formalized (and the vote would thus take place) today (29 November 2012, 65th anniversary of the UN partition resolution, "International Day of Solidarity with the Palestinian People"). "The required simple majority is already guaranteed", an ecstatic Abbas told reporters in Cairo. Palestinian officials reckon the Resolution has nearly 60 co-sponsors and estimate at least 130 countries will vote for the proposal. EU member states will unsurprisingly find themselves, once again, divided, and their votes will surely follow the same direction as in the "UNESCO case" last year: 11 supported the entry of Palestine as a state, 5 opposed, and the remaining 11 abstained. One thing is for sure, and makes me really happy: Spain and France will vote yes.

This time last year, a similar demand put forward by Abbas to recognize Palestine as a full member state of the United Nations was blocked in the Organization's Security Council met by U.S. opposition - so this year Abbas seeks recognition as a "non-member observer state" before the General Assembly, where they expect to win enough support and there is no threat of a veto. Although the country will not become a proper UN member, the idea is to achieve similar recognition to the Vatican (the "Vatican status") and therefore be able to sign international treaties, participate in debates (although not to vote) and have access to UN agencies and international courts of justice with the same rights as a state. For example, as a U.N. observer member, the Palestinians could press for Israelis to be prosecuted for war crimes at the International Criminal Court in The Hague (even though several countries have begged the PA not to opt for this option). The PLO, the only authority nowadays representing Palestinians in the international arena, only has "permanent observer" status. Another thorny issue the media is not mentioning hinges on the border: while some pundits suggest that the most likely solution is to recognise the boundaries set in 1967, the UN may well refer the decision to the parties.

This move is considered by both U.S. and Israel as a "unilateral initiative" ultimately seeking international recognition. Both countries argue that Palestinian statehood may only be obtained (if ever) through a negotiating process and that the latter will be utterly put in jeopardy by Abbas' move. But the latest round of this kind of negotiations stalled more than years ago, mainly because of Israel's refusal to stop building settlements, illegal under International Law, in the West Bank (as the 1,300 approved just last week). The actual lack of viable alternatives has thus somewhat forced the Palestinians to push through this diplomatic initiative to advance their aspirations of statehood within the 1967 borders. Abbas has said the bid is "the only way to address the assault of settlement activity and to save the two-state solution". All in all and for all its faults and detractors, a weakened PA (that will undoubtedly strenghten its stance) has come up with a clever way of putting pressure on Israel and the whole international community, so as to refocus world attention on the issue. Abbas has already said that he is prepared to resume negotiations with Israel the day after the UN vote.

Against this background, Israel (which has dubbed Abbas's initiative "diplomatic terrorism") has already undertaken a full-blown counterattack campaign. While Abbas and his negotiating team keep raising support for his diplomatic initiative, Israeli Foreign Minister Avigdor Lieberman recently met with Israeli ambassadors in Vienna in an effort to better coordinate their counter-strategy. To that effect they count with the support of the newly re-elected U.S. President Barak Obama, who called Abbas weeks ago and asked him to postpone the Palestinian request. The U.S. State Department has also sent a "private memo" to European ambassadors to the UN, warning of a possible "collision" and "negative consequences" if their countries lend their support to the Palestinian state. In response, Palestinian leader Mohamed Stayyeh affirmed: "Obama has had four years to give us something, but has not done so".

Means Israel threatens to retaliate with include nullifying existing international treaties (both with Israel and other Middle Eastern countries) and range from cutting off financial flows to the Palestinian Authority (as it did last year via the withholding of tax transfers) to cutting water and electricity supplies to the people in the Occupied Territories, together with accelerating the expansion of settlements or removing the permits some Palestinians have to cross checkpoints and leave their territory. The Israeli Foreign Ministry released a "leaked" draft mentioning the possibility of even overthrowing Abbas. The document instructs Israeli ambassadors to convey the following message in their respective capitals: if the Palestinians go ahead with their project, Israel will dismantle the Palestinian authority and overthrow its president. "If the Palestinian proposal is accepted by the UN General Assembly, this would mean breaking the rules", Lieberman said. Washington could also cut the financial flow to the Palestinians (amounting to $500 million in 2011, even though the aid was stopped in November after the PLO gained full membership of UNESCO), as it has already done in the past. "We are asked to choose between bread and freedom. We need food to eat, but we also need freedom", replied Shtayeh. Israel has allegedly also offered some carrots if Abbas drops the bid, notably recognizing the PA as a state in temporary borders .

I am really hopeful this could represent a first step towards what should have happened decades ago, but I would however like to stress a key point: whatever happens at the UN, the Palestinian territories will remain under occupation, internally divided and largely dependent on foreign aid for years, and that's something we have outrageously gotten used to. Moreover, one issue adds to the eventuality of the result: after the ceasefire in Gaza (even though many believed Abbas' plan will be overshadowed, the result has been the exact opposite, and more countries have expressed their willingness to vote in favor, as they believe they have to support an alternative to the armed resistance of Hamas), taking into account the recent bouts of protest, with Abbas' popularity plummeting and negotiations with Israel at a standstill, are Palestinians actually paying attention? Do they really give a damn what the international community thinks at this stage? 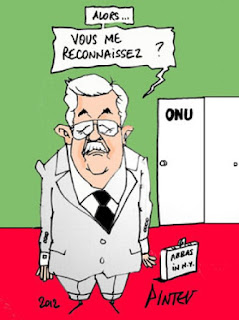 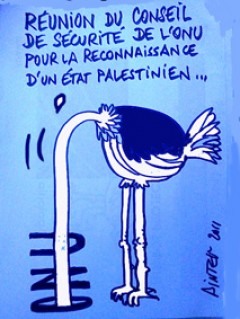