China seeks a greater role in the Middle East

By Unknown May 06, 2013
Apparently, China is hosting Israeli Prime Minister Benjamin Netanyahu and Palestinian Authority President Mahmoud Abbas for separate talks, showing a desire for a greater role in the region. The two leaders are due in Shanghai but will not coincide, as Netanyahu is due there on Wednesday, following Abbas’ departure a day earlier. China was looking forward to being able to organize an encounter and therefore to set up a meeting if the two men wanted. But understandably neither of them did.

Even though the "Empire of the Centre" has traditionally maintained a low profile in the region, it has tried in recent years to play a more active role. Its diplomatic efforts were principally directed towards the economic sector, as well as to the quest for strategical resources, namely oil and gas. But, as of lately, China has also shown greater interest in playing a certain role in the political arena. The latter intention did not bode well when the state repeatedly opposed international intervention in Syria alongside Russia. But that could change if China is successful in bringing Israel and Palestine closer. The country counts with one key advantage: it recognized the Palestinian state in 1988, four years before establishing diplomatic ties with Israel and has never shown unconditional support for the latter (although their economic ties are not negligible), having thus somewhat gained the hearts and minds of the Palestinians. 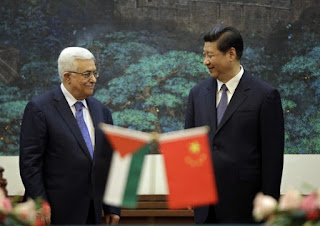