Throughout the week, a lot has been said about Israel attacking Syria. The news was about Israel carrying out airstrikes in and around Damascus, targeting missiles Iran intended to smuggle into Lebanon through Syrian soil. The final addressee was Hezbollah, which would in turn have later used this "game-changing" weapons to attack Israel. Even though Israel did not confirm the military move at the beginning (the first information came from US intelligence sources), many officials (including an Israeli ambassador acting as guest speaker in a conference on the Southern Mediterranean I had the honour to attend) have commented on it, affirming that Israel is not looking forward to intervening in Syria, but has drawn its particular "red line", that is, Iran providing the Shiite militia with powerful arms that will put in danger both the stability in the region and Israeli citizens' safety. As a matter of fact, and in anticipation to some kind of counter-attack, Israel, according to Reuters, closed its airspace to commercial traffic in the North (nearby the border with Lebanon and Syria) and moved two batteries of its famous Iron Dome (anti missile) system to the same area.

The so-called Hebrew state seems to have mixed feelings about the war in neighbouring Syria. On one hand, Israel needs the Damascus regime to maintain the status quo on the Golan Heights. Israel is at the same time afraid of a new Muslim Brotherhood (and their allies, namely Hamas)-dominated region. On the other hand, however, it would be incredibly advantageous for Israel to remove Syria from the resistance axis that nurtures Hezbollah. Israel is deeply concerned about the possibility of Syrian chemical and other weapons ending in the hands of either Hezbollah or Iran, and has always proclaimed they are ready to use all means at their disposal to prevent that from happening. While Israeli media used to call Assad "Israel's favourite dictator", the tide has now changed, and the ousting of the Allawite leader seems a brighter option, particularly if we take into account Israel was able to confirm during the Gaza crisis that the power of the Muslim Brotherhood could be "checked" up to a certain extent, and that thanks to pressure from the United States, Saudi Arabia and Qatar. In this respect, Israel and other countries are currently increasingly worried about the evolution of the war. Throughout the last months, the Syrian rebels had been significantly gaining ground and consolidating their hold on several key territories. As of lately, alas, the regime has regained power in several areas, mainly in and around Damascus (could this be a coincidence?).

Another reason of the attack some commentators have added to the equation is that Israel is seeking a pretext to drag Hezbollah into a war and prove the organization's assertion about the resistance's being ready to "assist and cooperate to liberate Golan Heights" wrong. These seem pretty good times to besiege both the group and the "Shia axis" from all directions, particularly after Nasrallah's warning and the fact that all stakeholders' cards seem to be now on the table. Israeli remains technically at war with Lebanon and Syria, and if the party-cum-militia is dragged into a war in Syria, they will have to thrust the conflict to further spill over into Lebanon and Iraq, and they will be forced to fight to the end. But Hezbollah has its own serious problems inside Lebanon. Besides, Israel's real enemy, Iran, which also vowed to respond to Israel's airstrikes, is also deeply preoccupied with the outcome of the presidential elections that are scheduled to take place next June. After the Arab Spring, Iran does not seem able to afford quelling a new "green wave".

The Syrian regime was swift to condemn the attacks, and claimed Israel was one amongst many actors directly supporting terrorist groups on Syrian ground. Syrian official have stated that Israel's attack was considered an act of war "opening the door to all possibilities". But let's not forget an Israeli warplane hit a Syrian military facility in January, also citing the smuggling of sophisticated weaponry in order to justify the move. And, in spite of the threats, nothing happened afterwards. Same in 2007, when Israeli jets bombed a suspected nuclear reactor site along the Euphrates River in northeastern Syria. Assad may be many things, but he is not a fool. And he knows perfectlynwhat attacking Israel would mean. Syria desperately needs all its forces on its soil, and would besides need the green light from both Moscow and Tehran in order to attack Israel.
Could this additional move actually represent further escalation of the conflict, and thus the first step towards all-out war in the region? All proxy-actors have showed their concern in this respect. Egypt and Lebanon have condemned the attacks, China expressed its angst to Benjamin Netanyahu, Russia has expressed its fear about an eventual increase in bloodshed... Precisely, the news came at the same time Russian Foreign Minister Sergey Lavrov and US Secretary of State John Kerry (the US has however justified Israel's attacks) announced they will convene within weeks a conference aimed at ending the Syrian civil war, in what many consider a significant breakthrough in a conflict that has been marked by stalemate and accusations of inactivity from the international community. From all actors in the international community?

What is, in my opinion, mostly at stake but at the same time often forgotten is the fact that Syria's is a civil war, in which both the rebel faction and the regime and its allies fight to the end because they are perfectly aware that losers in such wars either get killed or "ethnically cleansed". That is why a majority of analyses hinge on the necessity of walking both sides to the negotiating table. Further intervention from Iran and/or Hezbollah would straighten the stalemate and strengthen the regime, thus creating a Lebanon-style civil conflict. Outside intervention helping the rebels to topple Assad would probably put an halt to the war strictly speaking, but not the sectarian strife, as the Allawite minority and others who have supported Assad would continue to fight until their last breath as insurgents. Don't we have enough with only one Iraq? 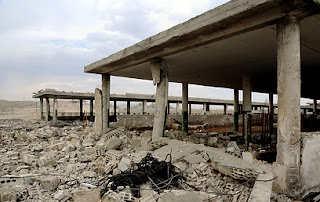