By Unknown May 27, 2013
Incredibly useful information taken from here (the rest of the analysis is quite interesting, too):

"'Alawi" is the term that 'Alawis (also called 'Alawites) usually apply to themselves ; but until 1920 they were known to the outside world as Nusayris or Ansaris. The change in name - imposed by the French upon their seizure of control in Syria - has significance. Whereas "Nusayri" emphasizes the group's differences from Islam, "'Alawi" suggests an adherent of 'Ali (the son-in-law of the Prophet Muhammad) and accentuates the religion's similarities to Shi'i Islam. Consequently, opponents of the Asad regime habitually use the former term, while its supporters use the latter.

'Alawis today number approximately 1.3 million, of which about a million live in Syria. They constitute some 12 percent of the Syrian population. Three-quarters of the Syrian 'Alawis live in Latakia, a province in the northwest of Syria, where they make up almost two-thirds of the population.

'Alawi doctrines date from the ninth century A.D. and derive from the Twelver or Imami branch of Shi'i Islam (the sect that predominates in Iran). In about A.D. 859, one Ibn Nusayr declared himself the bab ("gateway to truth"), a key figure in Shi'i theology. On the basis of this authority, Ibn Nusayr proclaimed a host of new doctrines which, to make a long story short, make 'Alawism into a separate religion. According to Ibn Kathir (d. 1372), where Muslims proclaim their faith with the phrase "There is no deity but God and Muhammad is His prophet," 'Alawis assert "There is no deity but 'Ali, no veil but Muhammad, and no bab but Salman." 'Alawis reject Islam's main tenets; by almost any standard they must be considered non-Muslims.

Some 'Alawi doctrines appear to derive from Phoenician paganism, Mazdakism and Manicheanism. But by far the greatest affinity is with Christianity. 'Alawi religious ceremonies involve bread and wine; indeed, wine drinking has a sacred role in 'Alawism, for it represents God. The religion holds 'Ali, the fourth caliph, to be the (Jesus-like) incarnation of divinity. It has a holy trinity, consisting of Muhammad, 'Ali, and Salman al-Farisi, a freed slave of Muhammad's. 'Alawis celebrate many Christian festivals, including Christmas, New Year's, Epiphany, Easter, Pentecost, and Palm Sunday. They honor many Christian saints: St. Catherine, St. Barbara, St. George, St. John the Baptist, St. John Chrysostom, and St. Mary Magdalene. The Arabic equivalents of such Christian personal names as Gabriel, John, Matthew, Catherine, and Helen, are in common use. And 'Alawis tend to show more friendliness to Christians than to Muslims.

For these reasons, many observers - missionaries especially - have suspected the 'Alawis of a secret Christian proclivity. Even T. E. Lawrence described them as "those disciples of a cult of fertility, sheer pagan, antiforeign, distrustful of Islam, drawn at moments to Christianity by common persecution." The Jesuit scholar Henri Lammens unequivocally concluded from his research that "the Nusayris were Christians" and their practices combine Christian with Shi'i elements.

The specifics of the 'Alawi faith are hidden not just from outsiders but even from the majority of the 'Alawis themselves. In contrast to Islam, which is premised on direct relations between God and the individual believer, 'Alawism permits only males born of two 'Alawi parents to learn the religious doctrines. When deemed trustworthy, these are initiated into some of the rites at 16-20 years of age ; other mysteries are revealed later and only gradually. Religious secrecy is strictly maintained, on pain of death and being incarnated into a vile animal. Whether the latter threat is made good, mortals cannot judge; but the first certainly is. Thus, the most renowned apostate from 'Alawism, Sulayman Efendi al-Adhani, was assassinated for divulging the sect's mysteries. Even more impressive, at a time of sectarian tension in the mid-1960s, the suggestion that the 'Alawi officers who ran the country publish the secret books of their religion caused Salah Jadid to respond with horror, saying that, were this done, the religious leaders "would crush us."

Women do most of the hard labor ; they are prized "precisely because of the work they do that men will not do except grudgingly, finding it incompatible with their dignity." Women are never inducted into the mysteries ("Would you have us teach them whom we use, our holy faith?"); indeed, their uncleanliness requires their exclusion from all religious rituals. Females are thought to retain the pagan cult of worshipping trees, meadows, and hills, and to have no souls. In all, females are treated abominably; but one consequence of this disrespect is that they need not be veiled and enjoy greater freedom of movement than Muslim women.

Unveiled women and several other 'Alawi practices - in particular, that wine drinking is permitted, and that some ceremonies take place at night - long excited Muslim suspicions about 'Alawi behavior. Then too, the obsessive secrecy inherent to the religion suggested to many Sunnis that the 'Alawis had something to hide. But what? Over the centuries, the Sunnis' imaginations supplied a highly evocative answer: sexual abandon and perversion.

Thus, the theologian al-Ash'ari (874-936) held that 'Alawism encourages male sodomy and incestuous marriages and the founder of the Druze religious doctrine, Hamza ibn 'Ali (d. 1021), wrote that 'Alawis consider "the male member entering the female nature to be the emblem of their spiritual doctrine." Accordingly, 'Alawi men freely share their wives with co-religionists. These and other accusations survived undiminished through the centuries and even circulated among Europeans. A British traveler of the early 1840s, who was probably repeating local rumors, wrote that "the institution of marriage is unknown. When a young man grows up he buys his wife." Even 'Alawis believed in the "conjugal communism" of their religious leaders. Such calumnies remain a mainstay of the anti-'Alawi propaganda circulating in Syria today.

Although the charges are false, 'Alawis do reject Islam's sacred law, the Shari'a, and therefore indulge in all manner of activities that Islamic doctrine strictly forbids. 'Alawis ignore Islamic sanitary practices, dietary restrictions, sexual mores, and religious rituals. Likewise, they pay little attention to the fasting, almsgiving, and pilgrimage ceremonies of Islam ; indeed, they consider the pilgrimage to Mecca a form of idol worship. "Spiritual marriages" between young (male) initiates and their religious mentors probably lie at the root of the charges of homosexuality.

Most striking of all, 'Alawis have no prayers or places of worship ; indeed they have no religious structures other than tomb shrines. Prayers take place in private houses, usually those of religious leaders. The fourteenth-century traveler Ibn Battuta described how they responded to a government decree ordering the construction of mosques: "Every village built a mosque far from the houses, which the villagers neither enter nor maintain. They often shelter cattle and asses in it. Often a stranger arrives and goes to the mosque to recite the [Islamic] call to prayer; then they yell to him, 'Stop braying, your fodder is coming.'" Five centuries later another attempt was made to build mosques for the 'Alawis, this time by the Ottoman authorities; despite official pressure, these were deserted, abandoned even by the religious functionaries, and once again used as barns.

Beyond specific divergences, non-conformity to the Shari'a means that 'Alawi life follows its own rhythms, fundamentally unlike those of Muslims. 'Alawis do not act like Sunni Muslims, with only slight differences; rather, they resemble Christians and Jews in pursuing a wholly distinct way of life. Matti Moosa notes that, "like the other extremist Shiites... the Nusayris had total disregard for Muslim religious duties." Ignaz Goldziher put it succinctly: "This religion is Islam only in appearance." It is important to make this point very clear: 'Alawis have never been Muslims and are not now.

Yet, as Ibn Battuta's account suggests, there is a permanent inconsistency in the 'Alawi wish to be seen as Muslim. In his case, it was mosques built and then neglected; at other times it is some other half-hearted adoption of Islamic ways. 'Alawis have a long history of claiming Islam when this suits their needs and ignoring it at other times. In short, like other sects of Shi'i origins, 'Alawis practice taqiya (religious dissimulation). This might mean, for example, praying side-by-side with Sunni Muslims but silently cursing the Sunni caliphs. The apostate 'Alawi, Sulayman Efendi al-Adhani, recounted having been sworn to dissimulate about his religion's mysteries. An 'Alawi saying explains the sentiment behind taqiya: "We are the body and other sects are but clothing. However a man dresses does not change him. So we remain always Nusayris, even though we externally adopt the practices of our neighbors. Whoever does not dissimulate is a fool, for no intelligent person goes naked in the market." Another 'Alawi phrase expresses this sentiment succinctly: "Dissimulation is our righteous war!" (al-kitman jihadna).

A British traveler observed in 1697 that the 'Alawis are

of a strange and singular character. For 'tis their principle to adhere to no certain religion; but camelion-like, they put on the colour of religion, whatever it be, which is reflected upon them from the persons with whom they happen to converse.... No body was ever able to discover what shape or standard their consciences are really of. All that is certain concerning them is, that they make much and good wine, and are great drinkers.
A hundred and fifty years later, Benjamin Disraeli described the 'Alawis in a conversation in the novel Tancred:

They take on the outward practices of all sects. If they meet [Sunni] Muslims, they swear to them and say, "We are like you, we fast and we pray." But they fast improperly. If they enter a mosque with Muslims, they do not recite any of the prayers; instead, they lower and raise their bodies like the Muslims, while cursing Abu Bakr, 'Umar, 'Uthman, and other [major figures of the Sunni tradition].
Taqiya permitted 'Alawis to blow with the wind. When France ruled, they portrayed themselves as lost Christians. When Pan-Arabism was in favor, they became fervent Arabs. Over 10,000 'Alawis living in Damascus pretended to be Sunnis in the years before Asad came to power, only revealing their true identities when this became politically useful. During Asad's presidency, concerted efforts were made to portray the 'Alawis as Twelver Shi'is. 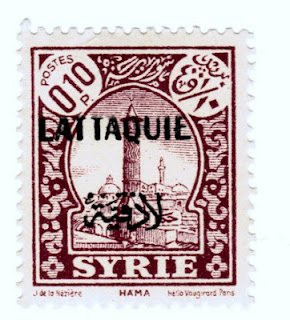