By Unknown February 11, 2013
President Mahmoud Ahmadinejad is officially the first Iranian leader to visit Egypt in more than 30 years, since both countries broke diplomatic relations after Egypt entered into a key agreement with Israel that entailed the recognition of the Jewish state, a move the Iranian Revolution harshly protested against. Ahmadinejad, who was in the Arab capital in order to attend a Summit of the Organization of the Islamic Cooperation, quickly embraced fellow Egyptian President Morsi upon arrival in Cairo, showing to what extent the thrust of closer relations between both countries was the actual aim of his visit. Both leaders also had the occasion to tackle the divisive Syrian issue both countries are heavily involved in, bluntly betting for an eventual round of negotiations that could lead to a pacific consensual solution. The mood of this meeting starkly contrasted with that of last year's summit, where Morsi blatantly chastised Iran regarding his stance towards the neighbouring civil war.

The Arab Spring that facilitated Morsi's ascending the throne left Iran looking for new allies in the region, moreover as its partnership with Syria is flounders and, being accused of fanning sectarian tensions, its animosity towards other neighbours is increasing. Some experts believe Iran's main intention is to approach the Muslim Brotherhood, thus luring Egypt into entering into some type of alliance that could create a stronger regional power, chiefly counterweighting the Gulf states whose stances are so different to both countries' regarding key issues. Indeed, Ahmadinejad admitted in a Lebanese TV that the political geography of the region may change if Egypt and Iran take a unified stance in the Palestinian issue. But, despite his close ties with Hamas' leadership, that does not seem to be Morsi's primary will, having repeatedly said his country will abide by the provisions of the 1979 Peace Treaty.

The controversial figure also visited the head of Sunni Al-Azhar University, marking a symbolic rapprochement between the two main rival factions of the region, That may however not be heatedly welcomed by countries such as Saudi Arabia and Qatar, which are nowadays vital to Egypt's stability, particularly in what concerns financial aid and the welcoming of Egyptian foreign workers who send key remittances to their homeland. The U.S., a country that gives each year one million euros to Egypt by way of military assistance, may also be alienated by any kind of rapprochement. In order to appease the situation in these countries, Egypt's Foreign Minister was swift to declare that the new period of rapprochement between his country and Iran will not occur at the expense of the security of its allies in the Gulf, although he did not make any mention of its Western ally...

Everything was not rose-coloured for the Iranian President, though. Ahmadinejad got a rude welcome during a visit to a mosque when he was attacked by a shoe, thus swelling the ranks of world leaders having a shoe being thrown at their heads, together with George Bush junior, Mahmoud Abbas, Netanyahu and several more. Ahmadinejad was also scolded by the Grand Imam of the Sunni Mosque of Al Azhar, who urged him to stop interfering in the internal affairs of the countries of the Persian Gulf and asked him to "respect Bahrain as a sisterly Arab state". 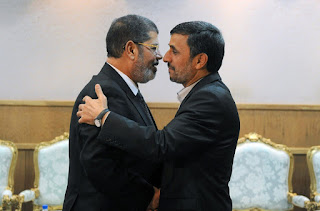