By Unknown February 27, 2013
It seems Syria, entering the third year of what many consider an all-out war that has taken the lives of more than 70,000 people, may have found a way to get out of the stalemate the country has been plunged into for months. That is, of course, if the main stakeholders in the conflict deign to relent and to do what's actually best for the state and its desperate population, the one who have been bearing the hugest brunt, as well as for its neighbors, most of them on the brink of deeper civil infighting.

While in Moscow, where talks with his staunchest ally (aka Russia)'s counterpart were scheduled, and also while scud missiles were reportedly launched in Aleppo, the country's Foreign Minister has declared its Government is ready for talks with whoever wants to, talks in which the armed rebels (he literally mentioned "those who have weapons in their hands) would be authorized to participate in, thus relinquishing one of the regime's main preconditions. Even though he did not offer specifics, his proposal could well represent the first step towards a negotiated transition. And he was right when he mentioned that reforms will never be achieved through bloodshed. As I have repeatedly said, this conflict will only be put an end to through comprehensive dialogue.

The Syrian opposition, still incredibly fractured as the latest Arab League meeting has shown, seems to be waiting for more, though, and most of his members, particularly amongst the SNC, have already bluntly dismissed the proposal as empty and deceitful, following the pattern of what happened weeks ago, when an offer for talks was completely rejected by the regime. Moreover, the coalition has threatened to boycott forthcoming international conferences/meetings tackling the Syrian issue, notably the next "Friends of Syria" Summit (in my opinion, the most inclusive and viable forum so far) due to take place in Roma, denouncing what they consider a worrying lack of compromise within the international community. It certainly would be a shame if extremists within the opposition succeed in hijacking the process and thus denying it any hope of peaceful resolution.

An optimistic turn of events has to be stressed, though. And that would be a shift of the US stance, towards more engagement and bigger efforts in trying to work out an agreement, symbolised by recent hints in the behaviour of new Secretary of State John Kerry, who is due in the region this week. That could spur shifts in other Western countries' stances, and even in those of Syria's neighbours that have appeared somewhat hesitant as of lately, notably Turkey and Saudi Arabia (which apparently has not completely stop its facilitating weapons to rebels). 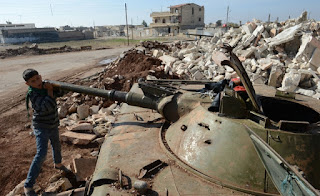