By Unknown February 11, 2013
The North-African country is again plunged into instability after a high-profile leftist opposition leader who was a vehement scourge of radical Islamists, Chokri Belaid, was slain on 6 February in what many consider a larger plot by extremists that have as of lately put the country under threat deteriorating both the social, the political and the economic situation. Demonstrations and clashes broke out throughout the country, many of them calling for the resignation of the controversial Islamist Government, amid fears that religious radicals are trying to derail the country's transition towards real democracy. The first 24-hour strike in years was called in by the strongest syndicate of the state. The funeral of the late activist has spurred concerns of a renewed polarization that could lead the country to a fatal stalemate, thus finally putting an end to the (few still alive) hopes the Arab Spring sparked two years ago.

The country's President admitted last week before the European Parliament the country has many enemies, some outside and some inside, that are trying to hijack the process that kicked off two years ago. Most political figures have condemned the killing, but have also put the blame on others, not on their own missteps. As Belaid himself decried before his assassination, many Tunisians believe the Government, and notably the main party Ennahda, is responsible for not being able to rein in its extremist members and of threatening a large opposition that nowadays feels besieged. The "Troika Government" appears indeed to be struggling to find compromise between religious hard liners and secularists, thus unable to set out their own genuine political agenda. That adds to the Constitutional stalemate that drags on.

As a result of the mourned killing, the Government is confronted to a serious political crisis, and Prime Minister Hamadi Jebali threatened to resign if a new technocratic government cannot be formed until the next round of elections. Ennhada swiftly condemned the assassination, but initially rejected the initiative. The party's real leader, Rachid Ghannouchi, remains ambiguous, and has even shown a certain amount of animosity towards the dead activist, not describing him as a "martyr" as Islamic tradition dictates. Other political figures, part of the latter's main coalition partner, the secular party Congress for the Republic, have also threatened to resign.

Elections are scheduled to take place in June, although no one is sure that event might put an end to the growing unrest. The worse bit is that almost all other neighbouring transitions seem to be clearly affected by what will happen in the birthplace of the Arab Spring, thus leaving the country and its leaders in an incredibly difficult situation. What happens in this country today might represent the drifts of the Arab Spring. Parallels can be drawn with Egypt: the Islamists were better organized and thus won the election, but that was no guarantee of their being able to manage such serious issues. However, while the Muslim Brotherhood have been relatively able to rely on the army, the backbone of the Egyptian state, the security apparatus in Tunisia was too compromised and Islamists have developed their own militias. Another key difference stands out: while in Egypt, the Islamist have large constituencies, that does not happen in Tunisia, were Islamist and secular forces are fairly balanced, and that clearly worsens an already existing worrying polarization. With Belaid himself, the last hopes that could accommodate about a peaceful transition might well have been also buried. 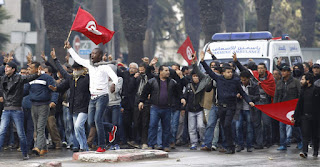