NYT: "Brotherhood Struggles to Translate Power Into Policy in Egypt"

By Unknown February 08, 2013
NYT's David Kirkpatrick never ceases to amaze me. His article on the obstacles the MB are finding on their way towards achieving total control of the state underlines incredible important facts not all critics speaking of "authoritarianism" have taken into account.

The Brothers are first having difficulties when it comes to bash the Supreme Constitutional Court's auctoritas. Indeed, during its first session after the Constitution was adopted in a moot referendum, "the president of the court sneered with disdain at a lawyer for the Muslim Brotherhood trying to address the reconfigured bench, stripped of 7 of its 18 members. “As if you left a court to be spoken of like this!” Judge Maher el-Beheiry snapped".  They have also failed to rein in Egypt's deep bureaucratic system that cannot be entirely replaced with fellow allies, as well as in Egypt's mostly independent security forces (not only the military, but above all the Police), which still refuses "to act on behalf on an individual president" against the majority. Another ally Morsi has failed to lure is the media, and notably state-owned outlets, despite last year's replacement of several top officials.

All in all, a brilliant conclusion: "although Mr. Morsi has the legitimacy of a democratic election, he has inherited the still-intact remnants of Mr. Mubarak’s authoritarian state, built on fear, loyalty and patronage, and much of it permeated by a deep distrust of the Islamists". 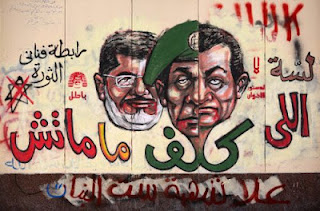