Elections in Israel: the outcome. What might the Palestinian territories expect?

By Unknown March 15, 2013
The introduction on the elections can be found here.

According to most forecasts, incumbent Prime Minister Benyamin Netanyahu's alliance won the parliamentary elections, and its leader duly claimed (a humbling) victory. But, as almost no one predicted, the process leading to the formation of a new government has not been as smooth as he would have liked, for the second place was surprisingly awarded to a complete newcomer, Yair Lapid, and his party Yesh Atid ("There is a future"). Naftali Bennett's "Jewish House Party" also did well, although not as well as expected. Moreover, both centrist and leftist parties made significant gains. Meanwhile, far-right parties did not fare as well as polls had indicated. The outcome also showed a new generation is being given shape to, for young voters voted for new candidates that repeatedly publicly denounced their being tired of the never-changing "old regime" of Netanyahu, Lieberman, Barak and the likes. Maybe I was wrong and there is hope in Israel after all? (maybe I shouldn't act so hastily this time either)

So, the results announced by the Electoral Commission shed a virtual tie in the number of seats won by the right and the left-wing blocks. Which partners will Mr Netanyahu was going to choose to enter into a coalition with? A significant part of the voters shown they want change, was Bibi going to listen to their demands and yield in certain milestones of his political stance, such as security and foreign policy? Since day one, he conceded he will have to pledge reform on economic and social issues, as Mr Lapid had hinted he was ready to enter into talks if Netanyahu engaged in social reform leading to the improvement of a weary welfare system. Nonetheless, Israel's PM also affirmed he will remain steadfast in everything concerning regional issues, thus implicitly promising an ongoing stalemate of the Arab-Israeli conflict. He will for sure keep on being particularly worried about Iran's nuclear programme, a concern shared by almost every candidate. However, and even if the campaigns did not say so, security and stability remain the primary concern for all, both politicians and voters.

Finally, after weeks of nail-biting and political bickering, Netanyahu has finally announced who the members of his "dream team" will be. He has done so after asking for an extension, but before welcoming President Obama, who is due in the country next week. Bibi, who will also assume the Foreign Affairs portfolio for a while, and Lieberman will enter into a coalition with two centrist parties: Yesh Atid and Hadnua. A far-right formation, Hayehudi, will also be part of the next Government, and will surely press for settler's rights, moreover if we take into account its leader, Naftali Bennet, will be granted the post of Economy minister and his party will control the Housing ministry. Surprisingly, though, Netanyahu has decided not to ally with long-time accomplices ultra-orthodox parties this time, and for the first time since 1977, probably bearing in mind the struggles he has been forced to go through during the last legislature as a result of these parties' intransigent stance on many issues. One of these issues is the future of haredim (ultra-orthodox dedicated to study the sacred texts) individuals, a cause Yair Lapid has been publicly fighting for. The latter wants, amongst other things, this growing population to pay taxes and serve in the army, as the rest of the Israeli people do, and many predict he will get his way thanks to his being appointed Finance minister.

Nevertheless, there is still hope for Palestinians. Even though "rising star" Benett, who's shown too hawkish an stance for his age, bluntly rejects any kind of negotiations with the Palestinians, for he opposes the establishment of a Palestinian state in the West Bank, man of the year and TV Star Lapid has repeatedly said he is looking forward to a revival of the Middle East Peace Process. And, above all, Netanyahu has somewhat given breathing space to the dove of peace by appointing centrist Tzipi Livni (who won the 2009 elections but failed to form a coalition), practically the only one who did speak out about the need to revitalize the peace process, Minister of Justice and exclusive negotiator with the Palestinians. Should the talks resume, that is.

The new coalition is likely going to be a weak one, though. For one, it will only comprise 68 of the Knesset's 120 seats, and will need help from other parties when passing vital laws and adopting critical measures. On the other hand, it is an heterogeneous group, whose stances regarding key files are deeply opposed. Only time will tell, as always, what the future may bring for Palestine. 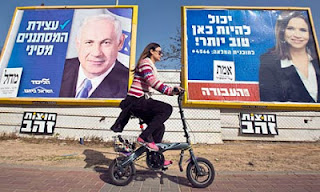