Did Algeria already have its Spring or is it waiting for it?

By Unknown March 20, 2013
There have been many comments on the media about an eventual "Algerian Spring". Some quickly retort Algeria already had its own Spring more than twenty years ago. Others are waiting for it. The rest believe things will never really change in the North-African country, at least not any time soon. Algeria has been dubbed the "bad pupil" of the Arab awakenings, the exception from this exciting phenomenon, a country where the status quo seems not to have been modified that much, despite the reforms put through by the regime one year ago.

One of the reasons an uprising is not likely in Algeria, unless a "black swan" appears, is that the country is not really a dictatorship, as Egypt, Libya and Tunisia were considered two years ago. Algeria is an oligarchy that presents a much greater deal of flexibility than its brethren, within the range determined by the authorities in power. All in all, the Algerian regime could be defined as a "liberalised autocracy" (some people compare it with Russia, some think it maybe represents the model Morocco is heading towards?), a not that repressive regime that notably allows for freedom of speech, as pluralism was already introduced back in 1989 and the state of emergency declared in 1992 was lifted in 2011.

Signs of unrest, particularly several cases of immolation in 2010 (hence, before Tunisia), have been however sprouting throughout the country for years, and have not ceased yet. But the regime has been incredibly wise and media-savvy when quelling them, resorting to what could be called a "carrot and stick" approach. The Government has, most of the times, bought off discontent, thanks to widespread pay rises (mainly benefiting the upper middle classes, civil servants, and security forces) and investment of significant amounts in schemes against young unemployment, for instance. This, which has been possible thanks to Algeria's extraordinary well-known gas-sustained wealth, has not led to any kind of meaningful economic shift in their economic policy, though, and figures in that sense remain extremely worrying in the long run. The Algerian authorities have also resorted to cooptation, a skill they have been developing for years now. After the neighbouring uprisings of 2011, they authorized the founding of new political parties, which were allowed to participate in the elections of summer 2012, although not to play any kind of significant role. Authorities have made recourse to sophisticated deal-making as well, even with opposition leaders, when in threat of loosing the reins of the regime.

On the other hand, the Algerian regime has felt impelled to take a hard-line stance against certain sources of unrest, sometimes quenching demonstrations turned violent of youth or unemployed people, or harassing civil society organizations (trade union, human rights watchdogs...). These and other associations have also found difficulties as of lately when trying to abide by new tightening regulations establishing harder requirements when it comes to funding or establishing links to political parties. Indeed, police and gendarmerie have been considerably strengthened in quantity and quality over the past decade thanks to the increased financial capacity of the country. Nearly all eruptions of violence are tiny and local-scaled, thus easily manageable by the security forces, who have been efficient enough not to shoot at them most of the times. The state's tendency to rely on violence to solve most problems is starting to cause too many frowns, though, as the recent hostage crisis showed. Algerian authorities have also decided to destabilise opposition figures when these become "too dangerous", notably shunning Sheik Abdallah Djaballah by sowing instability within his and other Islamist parties. And, last but not least, the new electoral law (endorsed by many Western authorities and pundits, by the way) allows the regime to "legally" rig elections, and rules on a vote that will uktimately produce the "right result" for the Government.

Algeria will however be confronted with further difficulties. One issue that worries politicians and regular citizens alike hinges on the uncertain succession that is to take place in 2014 (if Bouteflika keeps his word, that is). It's not just the President who will have to be replaced, but also other key high-profile authorities, namely the Chief of Staff and the Head of the Mukhabarat. Who will then arbitrate this process? A critical turn of events. The same problem arose twenty years ago, and instead of coming to terms, the elites entered set off a worrying infighting that led the country to descend into violence. And by some accounts, the regime is taking similar steps as in 1988...

The importance of the succession issue has to be emphatically stressed, precisely because the military has always played a very important role in Algeria. This role has be lesser in recent years, as the body has been gradually sidelined by Bouteflika. Their authority has been also eroded by the fact that the top echelon did not take part in the War of Liberation and doesn't have what could be called "Revolutionary legitimacy". This has entailed an increase in strength and size of the secretive DRS, the Intelligence Service, that apparently don't get along that well with the President and was the one to impose the appointment of the current Prime Minister, as they did with Bouteflika himself in 1999. This shift leaves however one important question unanswered: even if nowadays it's a tightened security landscape that guarantees stability, who will have enough political legitimacy to intervene if the situation deteriorates?

What role is the Algerian opposition playing? Contrary to what has happened in other countries and thus against the trend elsewhere, Islamists have not become the key players. And that is because their moment came years ago. But their moment also went away years ago. And it will be very difficult to recover the momentum the Islamic Salvation Front (FIS) had, for both its representatives and the Algerian people itself have dropped that utopian project that mobilised them before the dirty Civil War that physically and emotionally ravaged most of the country. Just like with Lebanon, too recent a bloodshed averts polarization within the society; people are too afraid to kindle the spark that could lead to useless painful infighting. The FIS' successors - barring armed Islamists, sometimes infiltrated by the DRS, who remain in the Sahara -, which have been dashed and discredited by the regime, are nowadays allowed to play by the rules of the country. Indeed, the Green Alliance won 10,5% of the votes last time, but Algerian Islamists are aware they don't have that deep grassroots support their brethren are renowned for in Egypt and Tunisia. The main reason for that divergence is that Islamists have not developed a sensible reformist agenda capable of convening an exciting convincing message, neither have they been able to push through leaders charismatic and strong enough. Moreover, instead of fighting the Government, dissidents neutralize each other and vie for power within the opposition, therefore widening the regime's leeway. There's not an opposition capable of gathering the people's dissent, as if they were not willing to come to power. A pseudo-opposition is thus part of the problem in Algeria.

Algeria is a nation that has never ceased to waver between optimism and bitterness, hope and resignation. Algeria is a sleeping giant with fabulous potential (from a human, agricultural, energetic, cultural or touristic point of view). Algeria is a country with an increasingly educated population (where the middle class is growing stronger and women are more and more powerful by the day) that is at the same time committed to a brilliant future and afraid of letting it shine. A very patriotic nation continuously suspicious of its enemies (they consistently opposed the French intervention in Mali), but also of its friends and neighbours (Algerians were enthusiastic with what happened in Tunisia and Libya, but only before NATO planes started flying over their cities). It's precisely their neighbours' misfortunes that keep Algerians away from the revolution everyone speaks about, that impels them to the Charter for Peace and National Reconciliation they approved eight years ago, favouring order over satisfaction. Algeria is a country where people that not dare protesting decide fleeing - the figures of illegal immigration (harragas) are frightening. Algeria is a country waiting for the oil barrel price to drop drastically to drastically wake up. 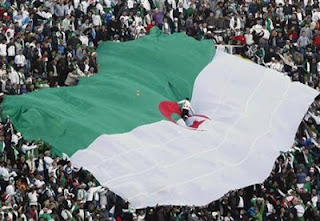