By Unknown March 18, 2013
As if Hamas didn't have enough... According to the ceasefire Hamas and Israel agreed upon under the auspices of Mr Morsi and the US after the short but bloody November war, all of Gaza's crossing with both Egypt and Israel should be opened. This would have meant the desperately needed lifting of the siege imposed in 2007 by Israel for what it called security reasons. But the text has not been entirely implemented. Far from that.

In 2010, Israel already eased some of the limits they imposed on imports into the coastal enclave. Trade was further eased across the Kerem Shalom crossing before its temporary closure after Gaza militants fired a rocket at the Israeli city of Ashkelon as a reprisal for the death of a Palestinian youth that sparked the fears of a third intifada. This crossing is an economic lifeline for the territory's 1.6 million Palestinians, as it provides the vast majority of consumer goods (building materials and fuel usually come from Egypt). Israeli authorities keep on strictly controlling the supply flows, though. Israel has also granted Palestinian fishermen and shepherds more vital fishing and grazing space. More or less, that was what was expected from the Jewish state.

This time, it's its fellow Arab neighbour and its Islamist rulers that have disappointed Palestinians, though. The Egyptian government has not completely opened the Rafah border crossing and only allows the crossing of "humanitarian goods", even though the Muslim Brotherhood protested this position when it was in the opposition. Worse still, Egypt has decided to stop the flow of goods through the smuggling tunnels under its northern border, and decided weeks ago to flood them with sewage, demolishing most of them. Moreover, Cairo's Administrative Court recently ordered the destruction of all of them on national security grounds.

Egypt has been toying with the idea of shutting down the tunnels for months. Egyptian officials defend themselves stating these tunnels are used for illegal ways of smuggling either people or weapons that can really harm Egyptian security. In a way, they are right, as bedouin tribes have been trafficking with weapons coming from Libya, turning the territory into a no-man's land. Palestinian leaders in the Strip however consistently dismiss this accusation and oppose the possibility of watching the tunnels disappear. This is completely understandable if we take into account officials estimate the value of trade to be $2 million a day (of which Hamas takes 7% in taxes), and that the network of tunnels brings in an estimated 30 percent of all goods that reach the enclave. Therefore, tunnels represent a huge part of the Strip's GDP. Last September, during a visit of Hamas' representatives to Egypt, senior Hamas official Mahmoud El-Zahar told Egyptian newspaper Al Ahram that "not even under ousted president Hosni Mubarak did Egypt think of crippling all the tunnels without providing an alternative". Egypt's move has fanned tensions across the border. As a result of the flooding, Hamas' activists tried to shoot at Egyptian soldiers. Egyptian authorities were quick to respond with hard reprisals, including confiscation of goods and tightening of security, probably with last August's events in mind (16 Egyptian soldiers were killed in a militant attack near the Gaza fence).

In spite of the hopes a Muslim Brotherhood's rise to power sparked throughout the impoverished Strip, exchanges have plummeted in recent month, thus causing a damaging increase of prices and the stalling of any kind of building activity, badly needed after last year's destruction of infrastructures. The Brothers have been accused of bending over to Israel in the West, more so because the 1979 Peace Treaty has not been amended in the least (US military aid is completely intertwined with compliance of it). But the Brothers are not entirely to blame: control of this file remains under Egypt's uber-efficient Intelligent Services (GIS), who have nearly always been in good terms with Israel's authorities and have notably, as of lately, put into place a sophisticated coordination between both armies to tackle instability in the lawless Sinai Peninsula.

Egypt has been once again accused of abandoning Palestine. This is not news. But Cairo might need to reconsider its stance, as Gaza is paradoxically becoming more and more dependent on Israel. Hamas' Government has been incredibly weakened, its popularity is approaching record lows. Some officials might believe this will push them into resuming reconciliation talks with Fatah. But that will probably not help either Palestinian unity nor the whole Palestinian cause, it is likely to merely stir violence and polarization. 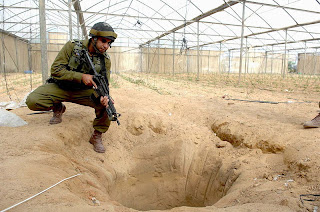