Is Libya different from its brethren?

By Unknown March 01, 2013
As of lately and since last summer, many world leaders and commentators alike have been urging Libyan leaders to move quickly on deciding the process whereby a new Constitution will be drafted. Everybody knew transition to democracy and rebuilding the country was going to be a huge endeavour, but nobody predicted such a Sisyphus' task, partly due to political wrangling and regional rivalries. Following the provisions of the Constitutional Declaration of 3 August 2011, the country held the first election in more than 50 years last July, considered generally free and fair by local and international observers. Even more importantly, Libya had, for the first time, functioning political parties and has since seen an optimistic proliferation of civil society organizations, as well as of dynamic media outlets. In August, the National Transitional Council handed power to a newly elected Assembly, the General National Congress, charged with the responsibility of forming a Constituent Assembly, which will then (once created, that is) draft a Chart in no more than 60 days. In September a new Government headed by Prime Minister Ali Zeidan was put into place, although after days and even weeks of political bickering, and amidst widespread accusations over the attacks of the US Embassy in Benghazi.


Seven months afterwards, nothing appears to have changed. Libyans, even more than their neighbours in other North-African countries, are frustrated by the slow pace of reform, as well as by the inability of the Government to put aside bickering and to curb extremists' and militias' violence that have sunk the country into dire unrest. Many inhabitants tried to convene this message through peaceful mass demonstrations that took place in the state's biggest cities on 11 February, celebrating the second anniversary of their particular uprising, despite fears that events could be hijacked by radical elements.

Moreover, an increasingly powerful federalist movement in the Eastern part of the country, where Benghazi lies and which concentrates the biggest part of the oil fields in the country and, therefore, the main source of revenue of its Government, is complicating the transition process. This region has felt somewhat marginalized for decades, both by Gaddafi's regime and by the authorities risen to power after the latter's ousting. This is understandable if we take into account that Libya has not always existed as a sole country, but was divided into three territories, claimed by some as nations, before its invasion by Italy: Cyrenaica in the east, Fezzan in the South/West and Tripolitania in the west. Most nationalists would like to re-establish the system put into place under King Idris until Gaddafi overthrew him. Some frustrated rogue activists, notably extremists accused of the Benghazi attacks of 9/11, have already resorted to violence. Many Libyans fear their demands will not be satisfied with mere semi/autonomy and believe the members of the movement will later demand full independence, dangerously following the same steps of their South/Sudanese brethren and thus plunging the country into another civil war. Growing federalism is, barring the Kurdish issue, precisely one of the issues other Arab countries have not had to tackle. Even though some think this problem will have to be debated one day, nearly nobody believes the time of these demands is right.

That is not the only division the country is confronted to. Both before and after the uprising, the country was divided into, on one hand the territories that were allied to Gaddafi, in cahoots with the leader and thus incredibly favoured by the regime, like his hometown Sirte and, on the other hand, the tyrant was for decades accused of neglecting and even sidelining other areas of the country, for instance Benghazi and its surroundings. And the abyss between victors and losers who one day fought together, the latter having escaped or being forced to face a dire marginalization, grows by the day. Just like that, transitional justice entailing true reconciliation is denied to nearly all citizens, notably because the work of the truth and reconciliation commission has stalled since its inception.

Another worry the current authorities have to face relates to the drafting of a new Libyan Constitution that is to replace Gaddafi's grotesque "Green Book". The main issue when it comes to deciding on the text of the future Charter, mirroring one of Egypt's woes, is disagreement over whether the Constitutional Assembly's 60 members should be elected or appointed by the Parliament (on 6 February it was finally decided that the members will be elected through a national vote instead of through appointment by the GNC). A new electoral law has yet to be passed before the establishment of the Assembly, which therefore is not expected until towards the end of this year. The process also has to be inclusive enough, to ensure both regions, tribes, ethnic groups, women and other minorities are equally represented and empowered. The debate also hinges on whether the process should take advantage of a certain "Arab Spring" momentum or, instead, take its time to appease all Libyans and external observers alike. Nonetheless, one striking difference with Egypt and its young Constitution should be explained with a view to understand current events. In Libya, there's not such a deep polarization between Islamists and Liberals/Secularists. The so-called Libyan "Liberals", headed by former Prime Minister Mahmoud Jibril, are closer to Islamism than those who did the Revolution and nowadays call themselves "opposition" in Egypt. There is widespread consensus that sharia should be part of the new system, but it has yet to be agreed whether sharia law would be the sole source of governance, a main source, or just a source of "inspiration".

A new debate has been taking place over the last days: Libyan lawmakers have been discussing the adoption of a political exclusion law that would ban anybody who has been previously associated with Gaddafi's regime from public office. This measure however presents certain drawbacks: it will be difficult to draw the line between "collaboration" with the regime and simple participation in the former Government, it might jeopardize the position of many current political figures, and it will certainly hinder reconciliation in an already polarized country whose heals have not entirely healed after an all-out civil war that destroyed nearly all the state's foundations.

The country has been for month increasingly being plunged into instability. To build a new army from scratch, different from the militias Gaddafi tended to be surrounded by, also stands out as a pressing issue, as the charge of protecting the Libyan population is nowadays still in the hands of the "thuwwar" (Freedom Fighters/young revolutionaries) that ousted the colonel. Indeed, the Supreme Security Committee (which at least receive funding from the state) and other military councils (that don't) do still cling to power. Most of these fighters will have to be offered either a post within the security forces, either a job or an education if they are to lay down their arms, normally used for what some call "celebratory gunfire". And those are the weapons that have been funnelled to Mali and other neighbouring countries on the brink of war.

In reality, Libya has to build a whole state from scratch, including a renewed judiciary system (most towns nowadays rely on a tribal system), improved infrastructures, a sound bureaucracy... and must decide what type of country it wants to be, taking into account what country it can become. This requires a careful task of choosing a unified and consensual History (learning lessons from Lebanon's case), of selecting the country's symbols and myths, with the aim of building a solid nation. Libya also has to pick its heroes, besides Omar al-Mokhtar, a hero of the resistance to Italian colonialism. And Libyans have to consensually decide what they are going to do of Gaddafi's figure and of his decades-long reign. All these steps are indispensable to a successful reconciliation process. 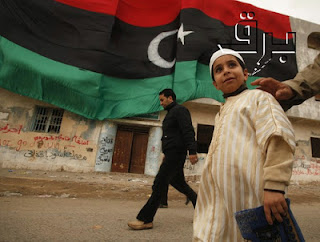 I cannot help but recommend a brilliant article by Bassem Sabry for Al-Monitor that pointed out what have been Egypt's (and notably, the Muslim Brotherhood´s) main mistakes (you can draw the parallels with my reflections on the issue here), that Libya may learn from and avoid.