Settler and peace activist at the same time?


Eliaz Cohen is a resident of the nearby settlement of Kfar Etzion, located between Jerusalem and Hebron in the southern West Bank. He is well-known thanks to its verses and several media outlets have dubbed him "the settler poet". He is a bearded yarmulke-clad faithful Jewish who cannot imagine a life outside its settlement and thus ran for a post in the Yesha Council (political arm of the Jewish residents of Yesha/West Bank) but who has, at the same time, helped many Palestinians to get Israeli permits to build new houses in scattered towns throughout the West Bank.

It all started when he learnt about the inadequate living conditions in the neighbouring village of Hirbat Zachariah, where overpopulation stifles growth and survival, and where the majority of teenagers have to emigrate from. He is not a staunch supporter of the one "state solution", but believes peace requires mutual recognition of everybody's right to the same land: "it is not about dividing the land but about sharing it together". He has an awkward stance when it comes to speaking about refugees, though: "it's even possible now to improve the lives of the refugees in the camps, to rebuild the camps". Does he thinks camps could be considered mere plots of land??

He is one of the leaders of the movement Eretz Shalom (Land of Peace), created by his friend Nahum Patchenik back in 2010. They are a small group of settlers promoting religious, social and economic cooperation with the Palestinians. They are tied to this land and will stay, but reckon so do the Palestinians, and thus want to learn to live with them. They organize interreligious meetings, distribute staples amongst the poor... More importantly, they organize common demonstrations against the separation wall. As of lately, they've set in motion a project whereby they will jointly cultivate a single field and will allocate the fruits to the needy: "the project is called Sdot Shamayim (the field of God) because we believe, both Jews and Muslims, the land belongs ultimately to God". As a result, they have had to face the rage of most of the settlers who consider the association a group of crazy utopian at best, a bunch of traitors at worst.

Both these "heroes" and those Palestinians who dare to work with them have understood one basic fact: their future is closely linked. They are therefore doomed to make peace. Mr Cohen doesn't find it hard to explain it: apparently, Prophet Zachariah is buried there and wrote "do not oppress the widow or the fatherless, the alien or the poor. In your hearts do not think evil of each other".

Apparently, he's not the only one to gather these features. Look at this piece on Al-Monitor about the orthodox rabbi Menachem Froman, a settler who also believe peace between Jews and Palestinians is possible and will eventually prevent. 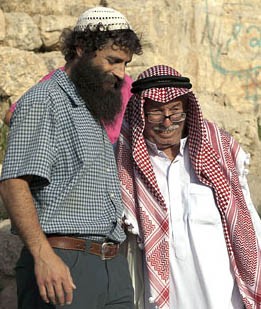