Saturday November 28th was a bleak day for Egypt. What had already been called the "Trial of the century" winded up with celebrations inside the Cairo Criminal Court and tears of impotence throughout the whole country. Mubarak was brought to the defendants' cage on a gurney and, as always, wore dark glasses and a navy blue cardigan. He looked both impassible and more distant than ever. The judge was unambiguous and tried to appear neutral when declaring: “it is not suitable for a former President to be taken to a Criminal Court.” And just like that, the dictator who ruled Egypt for nearly 30 years and whose ouster sparked chants of joy and idealistic dreams - both inside and outside the country - was cleared of all charges linked to the killing of protesters back in 2011. 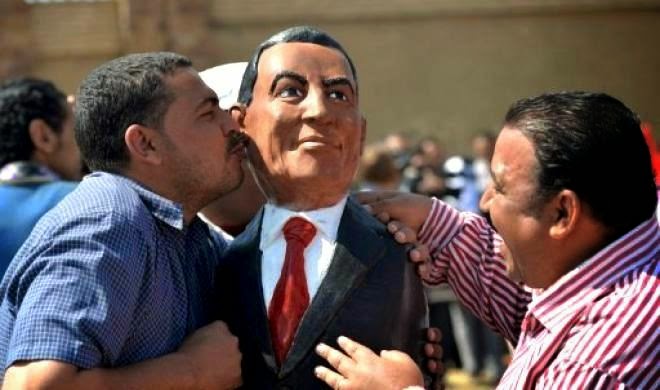 WEEKS AFTER his overthrow, Hosni Mubarak was first accused of corruption and embezzlement. He and former interior minister Habib el-Adly were sentenced to life imprisonment in 2012 for the same charges they have been acquitted of, before an appeals court ordered a retrial that began in April 2013. As if that wasn't enough, Mubarak was also acquitted of all corruption charges he faced, along with his sons Alaa and Gamal. In May, a Cairo court had sentenced him to three years in prison on embezzlement charges. The main media outlets immediately assumed that the former President would thus have to keep serving time in a military hospital in Cairo. This is however yet unclear, for he has been in detention since April 2011 and nobody seems to know for sure whether the past three and a half years will be considered as time served.

“...it is not suitable for a former President to be taken to a Criminal Court”
Even though the top prosecutor immediately announced that he would challenge the Court’s decision to drop the case, nearly nobody doubts this has been a political decision. Still, some in Cairo do not - or do not dare to - question the independence of the judiciary and blame the decision on technical aspects. The official version establishes that the statute of limitations in this case had expired, and that therefore the court lacked jurisdiction to rule on it. Allegedly, the Prosecutor's failure to indict Mubarak until three months after his ouster was an implicit decision whereby there were no grounds for a criminal trial. The prosecutor general then acted as a deception tool for the military, who made - and is nowadays making - a mockery of the judiciary, an institution that as of lately has sentenced over 1,000 defendants to death and acquitted Mubarak himself of human rights violations, in spite of decades of documented torture.
Many believe it is the regime that is discouraging and co-opting independent judges. What is essentially happening is even more disturbing: it's the years-long public discourse, the generalized weariness and fear, as well as the continuous brainwashing that have fashioned a judiciary that conforms with and implements the regime's wishes without even having to be required to. Before stepping down - and conscious of his delicate position - Mubarak did a great job in dismantling judicial independence and thus giving shape to a conservative body clearly supporting the pro-stability narrative. The exact same thing has happened with a vast majority of the population, and Egypt finds itself more polarized than ever.
Did the decision really come as a shock? The truth is that the acquittal for all is more shocking than Mubarak's own verdict. Many actually think the latter never gave orders to kill protesters, as he declared last year. He was re-trialed along with his two sons, his security chief and six of his aides. They were all acquitted. Also on trial - on graft charges related to the exportation of gas to Israel - was businessman Hussein Salem, a longtime Mubarak friend tried in absentia who is nowadays living in Spain. The ruling does nothing but mark another major setback, and maybe the last blow, for those who spearheaded the "Egyptian phase" of the Arab Spring.

THOUSANDS OF PEOPLE conveyed the same message throughout Facebook and Twitter: the #MubarakTrial is a wake-up call for all revolutionary factions in Egypt. "If we let this pass by, then January 25 is well and truly dead.” The sentence runs the risk of being perceived as the death certificate of the revolution, as it was issued after a trial not of mere individuals but of the whole idea of the 2011 uprising. Many of the revolutionaries are now in jail, have withdrawn from politics or have fled the country, while Mubarak and his pals are back for good, or at least are free to return. A martyr's relative was blunt about it: "the revolution was just a play by the people. My brother dreamed of bread, freedom and justice. His dream died in vain."
Moreover, and even though more than 850 protesters lost their lives in the 18 days of struggle that led to Mubarak’s stepping down and the SCAF’s taking over, the trial was only concerned with the killing of 239 protesters, whose names were ceremoniously listed in the charges sheet. After the revolution, Egyptians were charmed with promises of transitional justice that never saw the light. Reconciliation looks now less likely than ever. "It's as if they committed mass suicide", another relative said. Will the millions who lost their children, husbands, friends in the streets be muzzled again?

"If we let this pass by, then January 25 is well and truly dead.”
I cannot help but wonder whether this is not so much about the end of the revolution that it is about the "new kids of the block.” The verdict was the acquittal of the regime – of both Mubarak's and Sisi's regimes. The latter is showing to be even more ruthless than Mubarak's. Since the July 3rd coup that overthrew Mohammed Morsi, the consecutive governments launched a sweeping crackdown not only on the Muslim Brotherhood and its supporters, but also on scores of secular activists, including some of the leaders of the 2011 uprising. The array of excuses has been quite wide: from terrorism to violating the controversial protest law, passing through treason to the state.
THE REGIME and its deep state have changed to the worse, and its message is unequivocal: we are here in full force, if you like we'll eventually protect you, if you don't be prepared for the worst. In this respect, some believe that Mohammed Morsi's trial will be the regime's real acid test. The former Islamist President faces a slew of charges that include some related to the killing of protesters. These charges could see him sentenced to death.
Last but not least I have to admit Presiding judge Mahmoud al-Rashidi's speech nonetheless left a bittersweet taste, as he didn't fail, in a remarkably wise move, to praise the 25 January revolution, stressing that its goals — freedom, bread and social justice — were legitimate. The revolution not only ousted a despised dictator. The Egyptian people tasted freedom and embraced hope for the first time in decades. Verdicts, positions and empty words can be taken back or taken away from the people. Fortunately, this taste cannot.

This article was published on Your Middle East on December 2nd 2014.