Two years after the "Revolution"...

By Unknown January 24, 2013
This is the best article I found so far about how Egypt is faring and how Egyptians are feeling nowadays, written by a brilliant analyst, Bassem Sabry. The best part? The encouraging conclusion. You can make it, Egypt, you know you can!!

"Of course, it is not all bad. In fact, I began the year with an article explaining why I still see an incredible amount of hope in Egypt, and why I feel the historic momentum is still largely on the right side. There is a resilient private media, an increasingly aware and sophisticated society, more people getting deeply involved in politics, impossible courage and determination, a strong movement to grow civil society despite the hurdles, an opposition that is finally working together, an explosion of creativity and free expression and a growing realization by everyone that vacuous slogans and mere political positioning will not guarantee you political power.

Democracy, in many ways, is still showing signs of forcing itself — apparently against the will of some — to be born. A recent theory claimed that all revolutions go through a critical year-two point at which things look bleak, and indeed this is not where Egyptians hoped their country would be two years after their revolution. Still, it could all be saved, and I see many reasons to stay optimistic and resilient. I genuinely believe that." 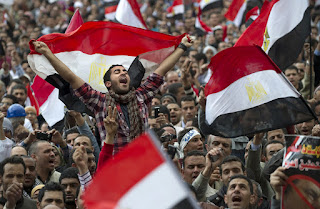