By Unknown January 24, 2013
Previous articles about the situation in Jordan here and here.

Despite King Abdullah's considering a postponement in view of the growing polarization between the government and the opposition and the widespread popular protests (some of them including people actually  burning their voter ID cards), elections in the country were held as scheduled on 23 January, and thousands of voters went to the polls to vote for a new Parliament amidst non-abating calls for reforms. So far, foreign observers have characterised the vote as a free and fair one, only marred with minor disruptions, and security was beefed up with an eye on the eventual resumption of protests throughout the country.

However, the huge hiccup of these elections hinges on the fact that not all eligible voters are participating in these elections, for various opposition groups (notably, the Jordanian Muslim Brotherhood, the Islamic Action Front) decided weeks ago to boycott the vote, as they did in the 2010 elections, so as to underline their dissatisfaction towards the pace of actual reform in the Hashemite Kingdom, where they demand a real democratic overhaul leading to a more representative country and not, as I stressed before, the overthrown of the King, with whom they have been closely working for years (unlike neighbouring Egypt and Tunisia). Consequently, many analysts are already reflecting on how representative the elected legislative body will be, and are therefore questioning the legitimacy of the vote itself. Estimated turnout could be as low as 20% in cities such as Amman, Zarqa and Irbid, not only as a result of the boycott but also out of deep apathy within the Jordanian population. Dismissing an "ineffective" boycott, the authorities have pledged the beginning of a "new era of political reform", in order to which the process will go on as established, for the Government cannot fall prey to blackmail on the part of Islamists. The elections will be the height of a process including such important steps as  introducing amendments to the Constitution, passing new laws on political parties and elections, and the creation of a constitutional court as well as an Independent Electoral Commission.

Besides the "boycotters", more than 1400 candidates (only 191 are women and 22 are Islamists) are competing for a position in the 150-seat Chamber, which has 15 seats reserved for female candidates and 27 seats reserved for candidates from national parties' lists (more than 60 national lists will compete for these seats). The Jordanian Parliament is traditionally composed of businessmen and representatives of large families or tribes that have favoured rubber stamp past Governments for years, what some call "the usual suspects of Jordanian elections". The latter feature, that is, the non permitting the consolidation of an strong political culture, has also been a common target of criticism both from the opposition and foreign commentators, alongside the fact that the emphasis of the electoral law is put more on "individual races" than on the formation of political parties and success in previous ballot-boxes, thus artificially maintaining a system favouring and legitimizing tribal affiliation and clientelism. Particularly, what the Jordanian branch of the Muslim Brotherhood complains the most about is the fact that votes from rural areas are granted more weight that votes from highly populated urban areas; which makes sense if we take into account that Bedouin-rooted individuals (thus sharing the same tribal base as the Royal family) tend to live in the former, while citizens with Palestinian /Transjordanian origin tend to live in cities. More than two thirds of Jordan's 7 million people live in cities but are allocated less than a third of assembly seats. On the other hand, officials are not entirely wrong when they cite the Egyptian example and warn that reserving more seats for parties would unfairly favor the Brotherhood, as "smaller parties have not had sufficient time to develop".

Indeed, these elections could also be seen as an opportunity, for they could be a part of a process leading to the establishment of a real constitutional monarchy. The country is moving toward its having an elected Government for the first time throughout its history. Even though ideally a Government should be drawn from the party having obtained the largest share of seats in parliament, this time, and until Jordan is endowed with real national political parties, the next Prime Minister will be based on consultations with the largest blocs in the elected Parliament. The new Government will have to face tough challenges, notably pushing the reform process even further, tackling the economic crisis and figuring out how to deal with the problems spilling over from the Syrian civil war. 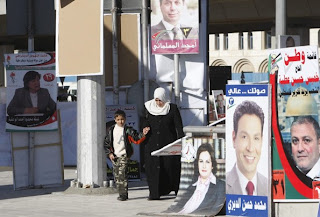