A tale of two Iraqs

By Unknown January 16, 2013
A brilliant explanation about what is actually happening in Iraq:

"On the left, where one would expect it, is “Irak [sic] Arabi,” between the Tigris and Euphrates Rivers.  But, if you look to the left, south of Teheran, you will see “Irak Ajemi” right in the centre of modern Iran.  In the middle is Arabistan, the Arab region of Iran the British have been trying to destabilise.  So what gives?  Even in those times, the two Iraqs were parts of different nations, Arabi under the Ottoman Turks and Ajemi in Persia.  The one thing the two places have in common are the holy Shi’ite cities in or around them: Arabi has Najaf, Samarra and Karbela (Karbala) and Ajemi Kum (Qom.)

The purpose of showing this map is to illustrate the basic truth about modern Iraq: it is an artificial creation, one concocted by the British after World War I.  With the Sunni and Shi’ite Arabs, the Kurds, the Assyrians and all of the other groups, real nationhood as understood in the West is, to misuse a good Muslim term, a mirage". 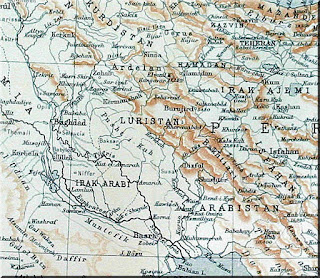