Is KSA shifting its stance on Syria?

By Unknown January 16, 2013
A great article in Al-Monitor (undoubtedly one of the best sources of information concerning MENA affairs), that also interestingly enough tackles the foreign policy shift of other countries in the region (namely Jordan, Kuwait and even Egypt). I keep wondering why these countries could not foresee in the past some of the factors they are now taking into account, notably the presence of extremist forces on the ground. Has that been a surprise to anyone?

In his outrageous speech, many were surprised after "Assad did not mention Saudi Arabia despite the fact that he talked about countries financing, arming and supporting insurgents". Indeed, it appears the Saudi has renewed contacts with the Syrian regime over the last weeks and that's apparently because of various reasons:
"• The steadfastness of Assad and his army over the past 22 months.
• The growing role of Salafist forces in Syria and the fear of the spread of this role to Saudi Arabia and other countries.
• The position taken by a number of Gulf states, especially the United Arab Emirates, to confront the spread of the Muslim Brotherhood.
• The US position after the renewal of President Barack Obama's term. John Kerry, known for his friendship with Assad, was nominated to take over the State Department as successor to Secretary Hillary Clinton. This coincided with a prominent UK position as the British government expressed fears of a rising generation of Salafists — al-Qaeda in Syria — and fears of them infiltrating European countries to carry out acts of terrorism.
• Russian Foreign Minister Sergei Lavrov's announcement that the West is praying that Russia and China keep practicing their veto against any move for Western intervention in Syria. Saudi Arabia realized that Lavrov would not have said this had he not been sure of the West’s inability to intervene militarily in Syria and its insistence on a political rather than a military solution.
• Assad would not have called for early parliamentary elections had he not been confident that his army controls the largest part of the Syrian territory, and the cities in particular. Moreover, Assad knows full well that a segment of the Syrian people who once sympathized with the Syrian opposition are no longer supportive of it given the practices of the Salafists and Jabhat al-Nusra in particular, an offshoot of al-Qaeda, which is seeking to establish an Islamist emirate in rural areas surrounding Aleppo". 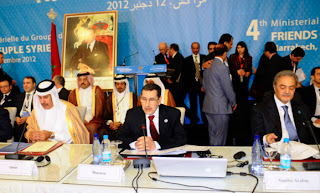