On Hamas' brand new spokeswoman (yeah, you read right: it's a woman)

By Unknown November 20, 2013
What's the first image that pops up in your mind when you think about Hamas? Dark-suited bearded men shouting and ranting? Hooded youths hoisting flags and marching on the street? Well, that may be changing, because the Islamist militant group has appointed a spokesperson different than what people in the streets are used to. It's an British-educated cultivated former presenter of Iranian state-run English news channel who wears colored clothes and often smiles into the wind. This person is 23 years old, has a child and has already divorced once. And it's a lady. Her name is Israa Al-Moudallal, and she takes pride in being the first woman to hold the position of spokesperson concerning relations with international media, a hard task taking into account Hamas' disadvantageous situation.

She descends from refugees of Ashdod and Al-Batani al-Gharbi and lived for three years in Bradford, northern England, where she moved in with her family when his father, Walid al- Moudallal, a political scientist with the Islamic University of Gaza known to be close to Hamas, decided to finish his doctorate abroad. In spite of her father's purported allegiances, she claims she does not belong to Hamas. Certain signs seem to support that claim: she shakes hands with male journalists and wears make-up. She additionally refers to "Israel" rather than the "Zionist entity" and affirm she would be equally willing to work as spokeswoman for Hamas' bitterest rival, Fatah. She insists she is a Palestinian above all.

Current head of the Hamas government’s media department,  Ihab al- Ghussein, who was appointed just six months ago and seems to be responsible for the makeover of the group's media relations, seems incredibly content with this choice: "the appointment of Israa is one of the ways we resort to in order to speak directly to the West". According to his words, the Government's aim is not only to reach the West, but also both women and youths, two groups of Gazans that have as of lately shown their weariness towards an increasingly radical regime that doesn't allow for any kind breathing space at the slightest sign of dissent.  She is aware of this need and stresses that they also "need to focus on the human side". Indeed, Hamas has also recently appointed young members of staff to increase its social media output (and maybe to counter Gaza Tamarrud's propaganda).

In what concerns Hamas' stance towards women, women are permitted to work, drive and hold public office. Many official like to boast about the fact a fifth of public servants working for the government are women. There is just one female minister and several deputies, though. Moreover, Hamas has been accused more than once of curbing women's freedoms in Gaza. There's was an outburst of international outrage when months ago women were banned from joining a United Nations-sponsored marathon, leading to the organization cancelling the event. In the past, moreover, the authorities have issued specific orders for women to wear conservative dress and not to wear make-up, and banned them from day-to-day activities in the Strip such as smoking water pipes and riding on motorbikes. That's why many believe the appointment merely represents a cosmetic hypocritical decision. Let's just hope that regardless of Hamas' actual intentions behind the move, Isra al-Modallal is right when she affirms that women in Gaza are finding their way into politics, medicine, education and media, claiming that "every day, women's footsteps can be seen advancing more in society". 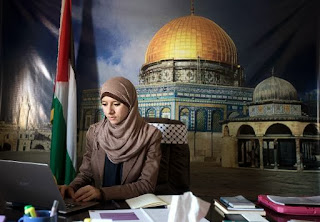