The rise of the far right in Europe. Case in point: Poland

A spectre is haunting Europe, the spectre of neo-fascism. The stir caused by a recent meeting between Geert de Wilders and Marine Le Pen, who are planning to form a far-right political coalition which will intend to participate in the 2014 European elections (if they are not banned from running, that is) is just the latest sign. According to a polemical survey carried out in France weeks ago, it seems both highly controversial figures will have a say. Record-high unemployment, falling living standards, a struggling economy and mounting concern over crime, confronted by seemingly powerless traditional parties, have fuelled a rise in support for the far-right which isn’t solely confined to France and the Netherlands. At the end of September, Austria’s far-right Freedom Party gained over one-fifth of the votes in the country’s general election, while over the course of the year the visibility of Britain’s anti-EU United Kingdom Independence Party has also been climbing after making surprising headway in May’s local elections. Other remarkable cases have taken place in Hungary, Greece, Finland and Belgium, amongst others. Some pundits have even spoken about a return to the pre-WWII era.

Concern over this phenomenon is also mounting in Poland, though the country is one of the countries who have weathered well the economic crisis. Last 11 November, tens of thousands of people took to the streets of Warsaw called by ultra-nationalist right-wing groups without parliamentary representation to celebrate the country's Independence Day. The demonstration was dissolved after registering violent incidents that left seven policemen injured, dozens of arrests and several cars on fire. Hooded protesters, most of them extremely young, also attacked a building occupied by left-wing squatters and set fire to an art installation with the colors of the rainbow symbolising the gay community. The troublemakers hoisted national flags and chanted slogans such as "God, honor, country" demanding the resignation of the government of centrist Prime Minister Donald Tusk.

An Independence March has taken place every year since 1989 honouring national hero Jozef Pilsudski and commemorating the day Poland achieved renewed statehood in 1918 after its lands had been partitioned for more than a century by Russia, Prussia and Austria. While five years ago, Independence Day only attracted a few hundred activists wearing SS uniforms and displaying overt fascist symbols, in recent years supposedly more moderate conservative groups have joined the marches, chiefly as a side effect of the conservative and catholic media (especially Radio Maryja) trying to depict any criticism of the march as an attempt to stifle freedom of expression. As a matter of fact, the annual assembly has undergone an alarming growth since 2010, from around 3,000 participants to approximately 20,000 last year. Already in 2010, several Polish activists spoke out against the exacerbated nationalist overtones of the march. The number of violence-related reported cases have been growing by the year as well. This year the events coincidentally coincided with the United Nations Framework Convention on Climate Change. The numerous media present in Warsaw, unimpressed by the ever-stalled climate talks, were swift to broadcast images of violent clashes between far-right activists and police, cementing fears throughout Europe that the far right in Poland is indeed growing in strength and influence.

This year, however, in a bid to avert accusations of provocation and distance themselves from what many saw as an exclusively nationalistic act, Poland's main conservative parties (spearheaded by  Jaroslaw Kaczynski's Law and Justice Party) advised their supporters to march in Krakow, not Warsaw, while the Polish presidency organised a national day march separate from the far-right one and anarchists and leftists that had previously clashed with nationalist groups decided to move their demonstration to November 9, the anniversary of Kristallnacht. The far right was thus alone on the streets.

The two main Polish far-right groups that called the demonstrations were the National Radical Camp    (ONR) and the All Polish Youth (MW) Catholic organisation. While the first organisation takes its name from a pre-war organisation that was noted for its anti-semitic campaigns, the latter declares in its mission statement that it is at war with the doctrines of "tolerance" and "liberalism". These groups are united by the pursuit of a "mono-ethnic society" and are mainly made up of young people, not only unemployed and "black sheep" but also from wealthy backgrounds. In 2011 both parties announced the launch of a new united front called the National Movement in preparation for the 2015 general election, modelled on the Hungarian far-right party Jobbik and accompanied by a trained paramilitary squad called the Independence Guard (neo-fascist movements often associate themselves with either football hooligan groups or war-related language and symbolism).

But violent attacks against targeted minorities have not been limited to nationalist marches. According to one of the main anti-racism watchdogs in the country, Nigdy Wiecej, between the start of 2011 and the middle of 2013 over 600 hate crimes have been committed, mainly against homosexuals, communists (or plainly leftists), foreigners (above all Chechens because of their Muslim background). What is more, in the past three decades there have been more than 50 murders committed against victims whose ethnicity, religion or sexuality made them different. The perpetrator's sense of impunity has alarmingly been growing too (the fact that the applicable legislation is hardly ever used may have something to do with it), together with the population's apparent apathy. In fact, a so-called "death list" was published in recent years on the internet site of one neo-Nazi group, with photos and addresses of alleged "enemies of the white race", including left-wing, anti-fascist and feminist activists. The consequences were shocking at the very least: public outrage was minimal and only a few people were ever sentenced to prison.

One of the main explanations for that does not merely lie in the economic situation, but in the country's very tradition. Even though it has become a much more secular and pluralist society than it was decades ago, Poland remains a deeply religious country and the Catholic Church continues to have a staggering grip on public life. Poland's political arena has still not welcomed a real liberal left-wing party. Even the party in power, Donald Tusk's centre-right Civic Platform, believed to represent the moderate views in the country, is also leaning to the right, particularly when it comes to sensitive issues such as abortion and homosexuality. The truth is that in Poland there is no precise definition for the notion of a far right and it is fairly difficult to distinguish between a majority of parties on the right of social and political discourse in the country, and those on the extreme right.

Even though no radical right-wing party has, so far, gained a seat in parliament, these groups have developed in a very dynamic way and should not be underestimated. The very sight of any organisation carrying Fascist symbols or resorting to hate speech should be an affront to anyone that claims to uphold universal principles such as human rights and democracy. And it should not be enough for Polish conservative politicians to distance themselves from some of the actions of the far-right, as attacking constitutional values should amount to having someone's political legitimacy being questioned. Maybe jumping the gun, both Prime Minister Donald Tusk and the new Minister of Interior Bartłomiej Sienkiewicz have been heard as of lately making statements against racism and xenophobia, and pledging renewed actions to be brought against this kind of activities. Despite of what Jarosław Kaczyński said after the 2011 elections, Warsaw, the city which hosts not only Central and Eastern Europe’s nationalist march but also its biggest gay pride, must not become a second Budapest. 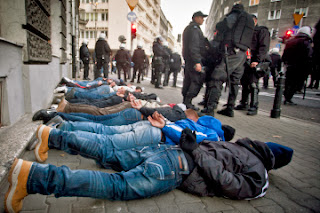